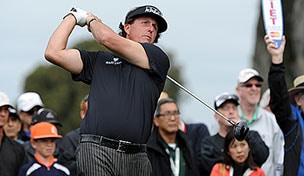 After the former Masters champion made his first cut since July 2011 Friday at the Farmers Insurance Open, he may have breathed a sigh of relief. One problem, though - too many players made the cut along with him.

Trimming the field to the low 70 and ties after 36 holes didn't do the trick this week, as 87 players finished at 1 under or better to advance to the third round. As a result, tournament officials will implement a secondary cut after the third round in order to further pare the field.

After 54 holes, the field will be reduced to the number closest to 70 - a stipulation that presents a bit of a moving target for players. Those eliminated will be assigned as 'MDF' - which stands for made cut, didn't finish. They will still receive credit for making the 36-hole cut, along with a check and official FedEx Cup points, but won't tee it up on Sunday.

At 3-under, Weir is currently tied for 41st and appears in solid position, but will play today again on the longer South Course - where his 3-over 75 Friday was nine shots higher than his opening round on the North. After his round Thursday, the Canadian noted the stern test presented by the more difficult South:

'You know the South is very difficult,' he explained. 'I hope to take advantage of the par-5s. A lot of the par-4s are long for me and pars are good.'

Along with Weir, several other notable names may be in jeopardy of missing the secondary cut. After bogeys on his final two holes Friday, Phil Mickelson made the 36-hole cut on the number, and is part of a logjam of players tied for 69th at 1 under. Rickie Fowler, who played with Tiger Woods and matched the leader's 7-under 65 Friday on the North Course, is part of a pack tied for 53rd at 2 under, but will now head back to the South Course where he struggled to a 5-over 77 in Thursday's opening round.