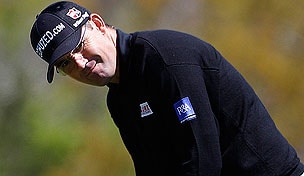 SAN ANTONIO – Ever since he was 14, Padraig Harrington has preferred to play competitively the week before a big event. If he’s at home practicing, there’s a good chance he’s tinkering and tweaking and, suddenly, a facet of his game is lacking.

“There is only one way to know where your game is at,” he said, “and that’s to hit a shot under pressure.”

OK, so the opening round of the Valero Texas Open rarely is pressure-packed – unless, of course, you’re Rory McIlroy, the man under the microscope.

But for Harrington, who was greeted Thursday morning with temperatures hovering around 50 degrees and a steady 20-mph wind, TPC San Antonio provided a stiff challenge. The kind he prefers. The kind he can’t replicate during a range session or practice round.

So perhaps it’s no surprise that despite three-putting the final hole for bogey, Harrington got up-and-down each time he missed a green and shot 4-under 68 to put himself one shot off the lead.

“I’m not walking away from this round thinking, ‘Wow, I hit a number of pure shots,’” Harrington said. “It was more of mental fortitude than ball-striking today.”

Sharpening the mental edge is never a bad idea with the Masters looming. So when asked his expectations for the week, the three-time major champion woofed, “I’ll try to peak this week knowing that I’ll probably fail and hopefully peak next week.”