Persistent fog wipes out Round 3 play at Torrey 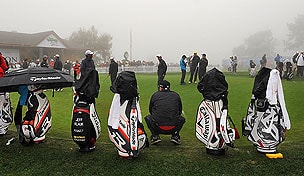 SAN DIEGO – Third-round play at the Farmers Insurance Open was never able to get going Saturday, thanks to a persistent fog layer that refused to leave.

Players spent most of the day at Torrey Pines, but ultimately only a handful even struck a meaningful shot, and no one in the field played more than a single hole. Despite multiple periods of optimism as clouds appeared to dissipate, conditions quickly deteriorated each time.

'We basically lost a whole day today,' said Mark Russell, vice president of rules for the PGA Tour. 'It's just difficult to deal with, especially when you know the weather is nice. It's not raining; there is no dangerous situation. You just can't see.'

The revised plan is to re-start play at 7 a.m. PT – and just keep going. Despite 87 players making the cut, there will not be a secondary 54-hole cut as was originally planned, and players will not be re-paired between the third and fourth rounds in order to save time. Instead, they will continue into the final round with their same playing partners, as Tour officials hope to have only 9-12 holes left for the leaders to complete on Monday.

'Hopefully, we won't have fog and we can play golf,' Russell added. 'If Mother Nature doesn't cooperate, we don't have very much control over that. We're going to be out here, ready to play, and see what happens.'

Saturday marked the first weather delay at the Farmers Insurance Open since 2005, when fog caused delays during both the second and third rounds.