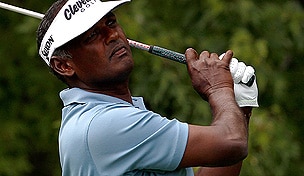 With Vijay Singh in the field again for this week's Northern Trust Open, it appears golf's biggest performance-enhancing drug controversy will remain unresolved - at least for the time being.

While punishment from the PGA Tour may still be in store for Singh after he admitted to using a deer-antler spray containing the banned substance IGF-1, the head of another governing body wondered this week what lasting impact the scandal might create.

'You begin to wonder if your testing regimes are right,' explained Peter Dawson, chief executive of the Royal & Ancient, in an interview with The Guardian. 'This is going to cause a lot of soul searching and I wouldn't be surprised if there are changes to procedure.'

The tests utilized by the PGA Tour since the inception of its drug-enforcement policy in 2008 have been scrutinized in the wake of Singh's admitted use of IGF-1. The Tour currently only uses urine testing, and while the substance is technically banned by the letter of the law, it's not detectable by the tests currently implemented. IGF-1 can only be detected through blood testing, which the Tour does not perform.

While Doug Barron remains the only player to have been suspended to date under the Tour's current testing policy and procedures, Dawson expressed concern that Singh's case may not be an isolated one.

'Over the years I've become pretty confident, and I hope not complacent, that isn't a lot of it going on,' he explained in the interview. 'I don't think we have been complacent, but I won't deny that when something like this happens it does make you think.'