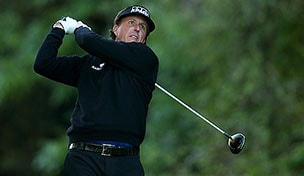 Having both notched high finishes in the event a year ago, Phil Mickelson and Keegan Bradley added their names this week to the list of players that will tee it up at next month's Shell Houston Open.

Typically staged the week before The Masters, the event has been moved up one week this year and is quickly assembling a top-tier field. World No. 1 Rory McIlroy is already slated to make his first Houston appearance since 2010, and he will be joined by Louis Oosthuizen, Lee Westwood and defending champion Hunter Mahan among others. Including Mickelson, who is ninth in the latest world rankings, four of the world's top 10 players will now be in the field March 28-31 at Redstone Golf Club.

Coming off a dominant win earlier this month in Phoenix, Mickelson won in Houston two years ago and tied for fourth last year. Bradley was also in that tie for fourth, four shots behind Mahan and two shots behind Oosthuizen, who continued the momentum of his third-place finish at Redstone a year ago with a runner-up showing at Augusta National the following week.

With the Houston event moving up in the schedule, the Valero Texas Open will now be contested April 4-7, one week before the season's first major.