Punch Shot: What is your favorite Palmer moment? 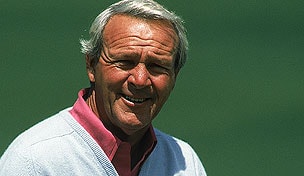 The PGA Tour makes its annual pilgrimage to Bay Hill this week, home of the Arnold Palmer Invitational. When you mention the King, a million moments come to mind. We asked our GolfChannel.com writers to reflect on their favorite Palmer moment.

One of the highlights of any golf scribe’s year is Wednesday at the Arnold Palmer Invitational, and it has nothing to do with what happens on the golf course.

Just before lunch on Wednesday, Arnold Palmer will hold his annual “State of the King” news conference, though it feels more like a chat at the 19th hole than an official media Q-and-A.

There is nothing more enlightening than to hear a legend’s take on the game, be it on a modern issue (anchored putting) or a historical footnote, which brings us to one of our favorite Palmer moments.

In 2008, Palmer was asked what he remembered of his first Masters victory in 1958. The answer was humbling.

“In my early years at Augusta, I remember it running in my ears constantly the fact that I didn't hit the golf ball the way you have to hit it to win at Augusta,” Palmer recalled.

“I hit a low ball. I always hit the ball low. That made my determination to win at Augusta even more, because I figured that if there is a way to get to where you have to get to on all of the holes at Augusta, hitting a low ball still made it possible to win, and it worked for me.”

That may be a bit of an understatement. Palmer would go on to win four green jackets with that “low ball.”

Four years ago, on a clear August morning with the sun already beaming down, I stood next to the tarmac of a private airspace as a Citation-10 with the letters “AP” in the tail number touched down in front of me with barely a screech. Within seconds, the door opened and down the stairs came the pilot.

Some guy by the name of Arnold Palmer.

I spent 10 hours with the King that day as he filmed a commercial, granted a few interviews, hit a few impromptu wedge shots and recalled the story of how his eponymous drink came to be for nearly every single passerby. Through it all, he was gracious, classy and genuine – everything you would expect from a man so beloved that he’s spent his entire adult life with fans referred to as an army.

It’s hard to pick a singular favorite conversation from the day, but this one might top the list: It was just after Tiger Woods had lost the PGA Championship to Y.E. Yang after admittedly playing cautious golf throughout the weekend. When I asked Palmer if he ever played cautiously while holding a lead, he cocked his head to the side, flashed a mischievous smile and said, 'I don't know what conservative is.'

At the end of the day, after hours upon hours of meeting new people and answering questions and taking direction, he lumbered up the stairs of his Citation-10, sat down in the pilot’s seat, waved to me on the tarmac and off he went.

You can spend a long time in this business – heck, in any business – and not have a day as memorable as that one. I’ll never forget it.

Back in 2004, when I was the golf writer at the South Florida Sun Sentinel, I set out to write about the 50th anniversary of Arnold Palmer's debut as a PGA Tour pro.

Palmer hit his first tee shot as a pro at the Miami Open at Miami Springs Country Club in 1954.

I was scrambling late to try to reach him with a deadline bearing down, so I found out where he was staying in Hawaii for the Champions Tour MasterCard Championship. When I was put through to his suite, an assistant answered. He told me Mr. Palmer was napping, but he would be glad to take a message and have him return the call. Yeah, right, fat chance, I thought, he hardly knows me. Fifteen minutes later, my phone rang. 'Hi, this is Arnold Palmer,' came the familiar voice.

Palmer proceeded to regale me with the story of his pro debut, how he drove to Miami all the way from his home in Latrobe, Pa., with his father, Deke, accompanying him. When he stepped to the first tee to hit his first shot as a pro, his father was practically a gallery of one. Palmer had won the U.S. Amateur earlier that year but there was little hoopla over his debut. 'I was just another rookie,' Palmer told me. He said he remembered his debut fairly vividly, as bad as it was. 'I hit the ball horribly, I was all over the place,' Palmer said. He remembered losing a ball in a palm tree while shooting 78-74 and missing the cut. He didn't just give me all the time I needed, he was enthusiastic in helping tell the story. How many superstars get up from a nap to return a phone call to a writer they hardly know and then gift wrap a story? I'll never forget that.