Punch Shot: Which celebrity would you want to play with at Pebble Beach? 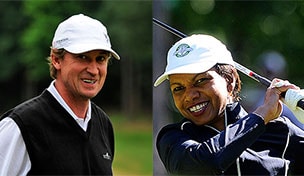 This week's AT&T Pebble Beach National Pro-Am is one of the coolest spectacles in sports, pairing the world's greatest golfers with A-list celebrities from several different walks of life. But if you could only choose one celebrity playing partner, who would it be? GolfChannel.com makes their picks for the week on Monterey Peninsula’s premier golf courses.

Like most questions, I can take this one a lot of different ways.

Do I want a celeb with whom I could be starry-eyed and hang on his every word? If so, give this New England Patriots fan Bill Belichick and watch as I wear out the word “genius” over the course of 54 holes.

Do I want a celeb with whom I have a prior relationship? For years, I was one of Chris Berman’s producers at ESPN. Teeing it up with Boomer would ensure plenty of laughs and I think he’d help shake any nerves that I might have standing on the first tee at Pebble.

Do I want a celeb with whom I can win the tournament? Umm, in that case, can’t Phil Mickelson be called a celeb? I’ll pair with him and reap the benefits – even if he does have to play as a plus-6 handicap for the week.

Just think: After three days slogging it around the peninsula with Condi, I’d have enough material to fill a week’s worth of Masters preview content. And that’s better than winning the pro-am anyway. Or at least, that’s what I’m gonna let my bosses think.

For people of a certain age, the former host of MTV’s Total Request Live played a prominent role in our formative years. Daly and his spectacularly gelled hair came into our living rooms every afternoon, from 3:30 to 5:30, and answered all of our most pressing questions.

Important questions – crucial information – such as: What’s up with Britney and Justin? Is her next music video even more scandalous than the last?

Which activist group has Eminem upset now? Will my mom let me buy his latest CD?

Which boy band will make me least nauseas today?

And there was Daly, in the middle of it all, counting us down from 10 to 1, interviewing the most mentally unstable musicians in the industry.

Whatever the case, those simpler, happier times won’t soon be forgotten. One day, perhaps, I’ll finally be able to thank him.

Give me 18 holes with Ray Romano.

My wife is a fan who falls asleep every night watching re-runs of “Everybody Loves Raymond.” It’s like the Barones are our neighbors. We know more about Ray, Debra, Robert, Frank and Marie than we know about our actual neighbors. So give me five hours with Ray Romano, whom I met after his pro-am round at the Kraft Nabisco two years ago. What immediately struck me is that he must not have had to act much in his popular sitcom, because he always seems to be in character. He was off-the-cuff funny after his round with Paula Creamer.

“He’s a funny guy, and it’s like he’s not even trying,” Creamer said that day.

Rarely do you get the opportunity to tee it up with a living legend in any sport, so I’m jumping at the chance to play alongside The Great One.

While it perhaps puts me in the minority among American sports fans, I still care about hockey. A chance to stroll the fairways and chat with Gretzky about his prolific years in Edmonton and his central role in perhaps the biggest sports trade of the last 30 years would be truly unique. It might require toeing a fine line, but I could perhaps also get some insight into how Dustin Johnson, daughter Paulina’s new beau, acted when meeting he and wife Janet for the first time. Surely that was a rendezvous that goes down in the 'Meet the Parents' Hall of Fame.

Speaking of Janet … even though it would likely earn me little more than a stern glare, I couldn’t miss a chance to ask Wayne if his wife, having been named years ago as the centerpiece of a large sports gambling ring, has any 'locks' for the upcoming season. Worst he could say is no…right?