Punch Shot: Who is the second-best American player? 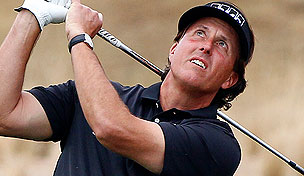 There's no question who is the best American player right now: Tiger Woods, currently ranked No. 2 in the world. But who is the second-best American? That one isn't so cut and dried. We asked our writers for their picks.

It's Phil Mickelson – and I'll let Brandt Snedeker explain why:

“You have to win majors and win tournaments to be recognized as an elite player,” Snedeker said when I asked him Sunday if he fits that profile. “And I haven't done nearly enough of that, you know. I'm playing great right now. I'm as high as I have ever been in the world ranking and all that kind of stuff, but you have to win tournaments to validate that. I haven't done it.”

When we're talking 'best,' though, I take that to mean a combination of most talented and most accomplished. Mickelson wins each of those battles against his competition.

This doesn't stem from one win in Phoenix this past weekend; it's after years of performing at a high level over and over again. Others are very, very good, but if we're talking about the 'best' American player outside of Tiger Woods, only Mickelson fits that profile.

Peculiar timing, perhaps, since his missed cut at the Phoenix Open was his first weekend off in more than a year. But before his MC last week, Duf hadn’t finished outside the top 30 since July. Before his MC last week, he hadn’t finished outside the top 20 in his last eight worldwide starts, which saw him in Australia, China, Hawaii and Abu Dhabi.

Over the course of those 22 consecutive made cuts, he has not only become one of the most consistent performers in the biggest events – holding a share of the 36-hole lead at the Masters, finishing T-4 at the U.S. Open, posting respectable finishes at both the British Open and PGA – he has won twice while rising as high as No. 7 in the world.

What’s most encouraging about Dufner is that he continues to improve, particularly on the greens, where his strokes gained-putting improved from 180th in 2010 to 78th last year. Coupled with ball-striking prowess – last year he was third in total driving and seventh in greens in regulation – it’s reasonable to suggest that a major Sunday could be looming for the second-best American player.

While you’re never quite sure what you’re going to get with Mickelson, you can bank on getting more wins than any American this side of Tiger Woods.

If you’re looking for the best active American winner besides Woods, then you need not look beyond Lefty.

Yes, Phil is closing in on his 43rd birthday early this summer, but he has now won in each of the last 10 seasons, the longest active PGA Tour winning streak. He’s still winning. He wins more than any American not named Woods.

Not only is Brandt Snedeker the second-best American right now, he’s been the planet’s top player (non-living legend division) the last fortnight.

But even before his consecutive runner-up showings to Tiger Woods (Farmers Insurance Open) and Phil Mickelson (Waste Management Phoenix Open), Snedeker was ascending to star status thanks to the game’s most reliable putting stroke and a new-found confidence in his ball-striking.

The metamorphosis began last fall as pressure mounted for him to play his way onto Davis Love III’s U.S. Ryder Cup team. Although Snedeker came up short – Love made him one of his four captain’s picks – he began the FedEx Cup Playoffs with a runner-up showing at The Barclays and cruised to a three-stroke victory and $10 million payday at East Lake.

Sixth-ranked Snedeker is also fresh off his first off-season in three years that didn’t include a major hip surgery which only seemed to fuel his confidence. No player has earned more world ranking points this season (77) and if not for No. 2 Woods and No. 10 Mickelson’s historic performances he would be a virtual lock to become the first FedEx Cup champion to play the Tour Championship the following season.

The world ranking doesn’t always get it right, but on this the math is unmistakable – Sneds is the second-best American right now.

Sure, he only has a fraction of Phil Mickelson’s career wins. And unlike Bubba Watson, Webb Simpson and Keegan Bradley, he doesn’t have a major title to his name. But if you ask me to name the best American golfer after Tiger Woods, in the here and now, I’m going with Snedeker.

It’s easy to overreact to what we’ve just seen. So while I was as impressed as anyone else by Mickelson’s win this past week in Phoenix, I have to balance that both with his significant struggles during the second half of 2012 and questions of how consistently Lefty – at age 43 – can produce the form we saw at TPC Scottsdale. Right now, the American player whose consistency is least in question is Snedeker. His FedEx Cup win has promptly been followed by three top-three finishes early in 2013, and the Vanderbilt alum has quickly ascended to status as the best putter in the game. He’s been inside the top 10 once out of every three times he’s teed it up since 2011 – consistency only Webb Simpson can rival among his American peers. Perhaps most importantly, he appears unsatisfied by runner-up finishes each of the last two weeks.

Admittedly, I may be buying a bit low on Snedeker, basing my view largely on current form but also somewhat on his expected performance over the coming months. But let’s put it this way: if you’re having a “best player not to have won a major” discussion in September, I don’t think Snedeker will be eligible for inclusion.