Putting is focus of Woods' Round 1 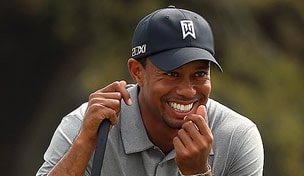 AUGUSTA, Ga. – What started out to be a new day at Augusta National for Tiger Woods – complete with an updated Nike 3-wood (Covert) and girlfriend (Lindsey Vonn) – ended with familiar frustration, if not for the world No. 1 then for the Masters masses who trailed his every move on Thursday.

They don’t dole out green jackets on Thursday at the former fruit nursery, and if historical context is any measure Woods’ opening-round 70 is perfectly on pace for another big Sunday, but the Achilles’ heel that has stymied the four-time Masters champion for seven years cropped up again in Round 1.

“I was there ball-striking-wise a few years through that stretch where I think I hit it pretty well. Hit a lot of greens, but just didn't make enough putts,” Woods said Tuesday. “I was there on Sundays with a chance, and unfortunately just didn't get it done. But as we all know, you have to putt well here. You have to make a lot of putts.”

On Thursday following an overcast opening effort one could almost hear those words echoing through the iconic pines.

While he was near the top of the field in greens in regulation (13 of 18) and fairways hit (9 of 14), his 30 putts left him squarely in the middle of the pack and four strokes adrift of the pace set early Thursday by unfamiliar front man Marc Leishman.

In short, Woods chalked his pedestrian putting day up to poor pace, and considering some of the putts he left himself late in the day his ability to avoid a three-putt is a victory by any measure.

“It was a good day on the greens which were a little tough,” Woods said. “They didn’t seem to have that sheen to them, that roll-out, that they normally do.”

No course in golf goes from 0 to 60 as quickly as Augusta National, and Woods was not alone in pointing out that green speeds seemed slower on Day 1 in relation to how they ran earlier in the week.

If his tie for 13th after Round 1 wasn’t exactly what the people expected from the consensus favorite consider that in Woods’ four victory laps at Augusta National he’s opened with a 2-under 70 on three occasions. The exception? An opening 74 in 2005, the last time he slipped into the green jacket.

“It was benign starting out, but the wind picked up in the middle of the round, swirling like usual at Amen Corner, but I was very pleased,” he said. “I lag-putted very well today.”

It seems apropos that the highlight of Woods’ round came at the 13th hole when he deftly cozied a 50-foot eagle attempt with 20 feet of break to birdie range; while rock bottom may well have been a missed 10-footer for par at the 14th and a 7-footer for birdie after missing the 15th green in the wrong spot.

Although Woods remained upbeat with girlfriend Vonn looking on, the episode felt like he’d turned a 66 into a 70, the culprit a pace-of-play problem that had nothing to do with five-hour rounds.

If the ghosts of Masters misses past were haunting Woods – he’s ranked inside the top 10 in putting for the week just once over his seven-year swoon at Augusta National – he wasn’t letting on. There was no marathon session on the putting green after his round, no “S” light sent high into the Georgia sky to beckon pro bono putting coach Steve Stricker for a quick fix.

It was interesting that Jack Nicklaus, who owns the benchmark for success at Augusta National (six green jackets) and in the Grand Slam count (18), revealed on Thursday that Woods has never really asked him about playing the Masters.

“He’s got his own focus and what he does, and I respect that. I respect when somebody is involved in their deal,” Nicklaus said.

Put another way, there was never really any need. Woods won the first Masters he played as a professional and three of his first six starts.

For all the focus on Woods’ seven-year itch at Augusta National and his inability to convert the clutch putts on command in recent years, he knows as well as anyone that at this juncture it is about the challenge, not the championship. There was nothing new about that.