This week the PGA Tour’s “blink and you’ll miss it” offseason comes to a close, with a fresh campaign starting in wine country. But the Safeway Open won’t be the only tournament to keep an eye on in the Golden State.

Several of the top women in the game will tee it up in Palm Springs for the ANA Inspiration, typically the first major of the year but now bumped a few months on the calendar by the COVID-19 pandemic. They’ll be battling both high stakes and high temperatures this week at Mission Hills, while some of the PGA Tour’s notable faces look to turn the page to the 2021 season and get some final prep for the upcoming U.S. Open.

From a pair of multiple major winners to the cast of characters looking to fill a void in the desert, here are the burning questions to ponder heading into this week’s pair of headlining events: 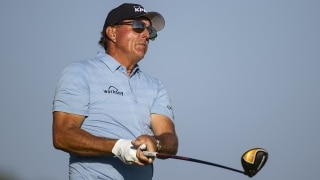 Fresh off a Champions Tour victory last month, Phil Mickelson is listed as the betting favorite for the season-opening Safeway Open.

Can Lefty keep pace with the under-50 crowd?

After largely thumbing his nose at potential Champions Tour aspirations, Phil Mickelson turned over a new leaf last month in impressive style by winning his debut appearance on the over-50 circuit. Mickelson flashed plenty of game (along with his trademark grin) in the Ozarks, but now he’ll turn his attention back to battling players half his age.

The 50-year-old is one of the headliners this week at Silverado Resort, where he’ll make his fifth straight appearance. While Lefty missed the cut last year, thanks in large part to an opening 75, his record has been otherwise solid in Napa: three finishes of T-17 or better, including a T-3 showing in 2018.

Mickelson missed the BMW Championship for the first time in the playoff era last month, the result of a mediocre season that was nearly saved with a T-2 finish in Memphis in July. But Mickelson has only one other top-10 finish on Tour in the 18 months since his most recent win, the 2019 AT&T Pebble Beach Pro-Am.

Despite his recent rough patches of form, Mickelson is viewed as one of the possible contenders in the season opener: PointsBet Sportsbook listed him as an 18/1 betting favorite atop the 156-man field.

Can Jordan Spieth get on track ahead of the U.S. Open?

Like Mickelson, Spieth missed each of the final two playoff events after a frustrating 2019-20 season. The former world No. 1 finished T-10 at Colonial but never got any closer in eight more starts after the break, bowing out with a missed cut at TPC Boston. He’s not wasting any time in racking up points for the new campaign, making his tournament debut at Silverado’s North Course this week.

Spieth hasn’t won since lifting the claret jug at Royal Birkdale more than three years ago, and he hasn’t had a top-5 finish since last year’s PGA at Bethpage. The former wunderkind is now 27 years old, 67th in the world rankings and lagging behind many of the players he once seemed head and shoulders above. But he has plenty of good memories at the two majors still left on the 2020 calendar, having won each of them five years ago, and he’ll look to fine-tune his game in the coming days before heading to Winged Foot.

The demands between the two courses will vary significantly: Silverado is a narrow, tree-lined layout with smaller greens and minimal rough. At Winged Foot, the USGA will have everything but the kitchen sink at its disposal. But a common theme could emerge for Spieth, and it begins off the tee: he ranked 165th last season in Strokes Gained: Off-the-Tee, often putting himself in impossible positions with wayward drives. If he’s able to straighten out the driver enough to contend this week, it could be a promising sign for his chances to avoid the penal rough and bunkers that loom next week.

Who will fill the shoes of the absent world No. 1 and defending champ at ANA?

Jin Young Ko won the ANA Inspiration a year ago, one of two major victories and four wins that helped the 25-year-old Korean reach No. 1 in the Rolex Rankings. But because of COVID-19 travel restrictions, she opted not to return to the U.S. this week to defend her title.

Her absence will be noticeable, even with the next eight players in the world set to tee it up in Rancho Mirage. The question of who can step up to fill the void begins with world No. 2 Danielle Kang, arguably the best player since the LPGA returned from break and now the highest-ranked player in the field. Kang won each of the first two Ohio events conducted after the pandemic hiatus, and she added a T-5 finish at the Ladies’ Scottish Open in her bid for three wins in a row.

Kang has major credentials, having won the 2017 KPMG Women’s PGA Championship at Olympia Fields, and she’s now playing some of the best golf of her career as the women’s game regains its competitive stride. She finished T-6 at this event a year ago despite a difficult final round and appears ready to make a big statement during a week when the only player above her in the world rankings will be watching from the couch.

Can Lydia Ko break through at a place where she’s won before?

Ko captured the ANA four years ago, seemingly poised to remain one of the top players in the game for years to come. But that is her most recent major, and after racking up 12 LPGA wins, from 2014-16, she has won just once in the years since.

Whether causative or reactionary, Ko’s decline has been matched by myriad changes as she has swapped coaches, caddies and equipment while looking to regain her form and return to the winner’s circle. She nearly got there last month at the Marathon LPGA Classic, only to be undone by a 72nd-hole blunder that gave the trophy to Kang.

But Ko remained upbeat in the wake of that stunning defeat, where she led by five shots on the back nine. It was also emblematic of her recent uptick in performance, as the Kiwi followed with a pair of top-15 finishes in Scotland including at the AIG Women’s Open.

At No. 41 in the world, Ko is not the same player she was four years ago when she was a top-ranked champion at Mission Hills. But a victory here this week would help erase some of the pain from last month’s collapse and, at age 23, return her to a trajectory many expected her to maintain early in her career. It would also be one that would likely receive plenty of support and celebration from peers of an affable and upbeat player.