Back of the pack: Rory hopes to limit 'sloppy mistakes' 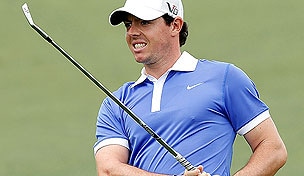 HUMBLE, Texas – Rory McIlroy’s final-round scorecard from the Shell Houston Open could be filed away with the Department of Redundancy Department.

Much like his previous three rounds, McIlroy made some birdies, but also countered with some sloppy mistakes while failing to break 70 for the fourth straight day.

“I made a few mistakes, hit four balls in the hazards. Apart from that, it was pretty solid,” he said after a 2-under 70. “You know, I hit the ball reasonably well. Feel like my short game is sharp and putted it pretty nice. So, yeah, it wasn't too bad. Just again if I can limit those sloppy mistakes, I'll be fine.”

McIlroy will now make the three-hour drive to San Antonio to compete in the Valero Texas Open, a last-minute decision made before Friday’s deadline. Played on a short, tight, often windy course, he explained that it doesn’t matter; he just needs more rounds under his belt.