McIlroy shoots 71 on Day 3 in Houston 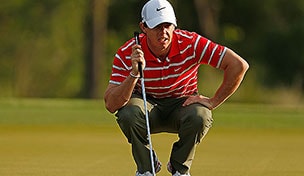 Getty Images
PEBBLE BEACH, CA - JUNE 15: Hugo Leon of Chile hits a shot during a practice round prior to the start of the 110th U.S. Open at Pebble Beach Golf Links on June 15, 2010 in Pebble Beach, California. (Photo by Ross Kinnaird/Getty Images)  -

HUMBLE, Texas – Rory McIlroy posted a 1-under 71 in the third round of the Shell Houston Open, but afterward he contended the score wasn’t indicative of how well he played.

“I hit the ball really well,” he said. “It's the best I've hit it on the golf course this week. So I take a lot of positives from it. Obviously the finish wasn't what I wanted. Just some silly mistakes from rustiness, I guess. I think with a little more competitive play, I'll eradicate that.”

With birdies on four of his first 12 holes, McIlroy had climbed from 54th place entering the day to inside the top 10.

The turning point, though, came on No. 13. He hit a five-foot birdie attempt three feet past the hole, then missed the comebacker to settle for a momentum-killing bogey. He would bogey the next hole and the closing one, as well, to finish with three bogeys in his final six holes.

“Didn't have the best of finishes, but I saw a lot of positives out there,” he said. “I hit the ball really well, the best I've hit it on the course this week and made me really happy with my game. I need to eradicate those mistakes.”

In eight completed PGA Tour stroke-play rounds so far this season, McIlroy has now failed to break 70 on six occasions.