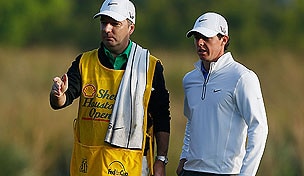 HUMBLE, Texas – If tournament officials at next week’s Valero Texas Open are looking for someone to thank for their early Christmas gift of Rory McIlroy in the field, they should start searching for his caddie, J.P. Fitzgerald.

With a humanitarian mission to Haiti scheduled for next week and the Masters pending one week later, McIlroy hadn’t given much consideration to competing at TPC San Antonio until Fitzgerald mentioned it after a second-round 70 at the Shell Houston Open on Friday.

“J.P. was the one that mentioned it to me,” McIlroy explained after a third-round 71. “He said, ‘If you just play a few more rounds, I think you're going to be ready.’ I didn't really think about it too much and sat down, had some lunch, started to think about it and I texted him and said, ‘I don't think this is a bad idea.’ Probably took me an hour or two to sort of think about it and decide.”

When asked whether he may feel a little burnout with the Masters serving as the third of three consecutive weeks of competition, the 23-year-old just laughed.

“This is my 13th competitive round this year,” McIlroy said. “There's not any worry of burnout. No, I just feel like I'm playing well, I'm hitting the ball well. Everything feels good, my game. It's just about playing a bit more competitive course and getting a little sharper. I feel a little rusty out there at times. I think the more rounds I play, the better it will be for me going into Augusta. So it wasn't something I really thought about, but once it was mentioned to me yesterday, I happened to think about it.”