McIlroy, Woods ousted in opening round at Match Play 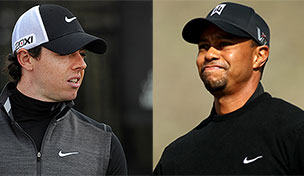 MARANA, Ariz. – Rory McIlroy and Tiger Woods knocked out in the first round of the Match Play Championship? Not many would have given that a snowball's chance in the desert.

Almost as surprising as the freakish snowstorm on Dove Mountain was the sight of golf's two biggest stars heading to the airport, only the second time in the 15-year history of this wild tournament that No. 1 and No. 2 didn't last more than a day.

Shane Lowry of Ireland chipped in twice and drilled a fairway wood to 3 feet to seize control, and then knocked out McIlroy with a bunker shot to 4 feet to save par on the final hole. Just as the shock was wearing off, Charles Howell III came up with the kind of shots he's used to seeing Woods make in the clutch – a wedge that stopped inches from the cup on the 15th hole, and a 25-foot birdie on the 16th that carried him to a 2-and-1 victory.

''It's definitely a day I'm going to remember,'' said Lowry, the third player in the last four years to eliminate the No. 1 seed in the opening round.

The biggest loser Thursday might have been NBC Sports, which lost the two biggest draws.

Not even Phil Mickelson can save the day. He's not playing this year.

Howell had not faced Woods in match play since he was 17 and lost to him in the third round of the 1996 U.S. Amateur. He said he had never beaten him even in the dozens of casual games they played over the years at Isleworth before Woods moved away to south Florida.

What a time to change that losing streak.

Howell, who qualified for this World Golf Championship for the first time in five years, played a fabulous round in cold conditions. They matched scores 10 times in 14 holes before Howell came through with back-to-back birdies.

The final matches were played in near darkness, and they could have stopped after 15 holes. Woods wanted to play on, even though Howell had the momentum. Woods was 2 under for the day, and neither of them made a bogey.

''We both played well,'' Woods said. ''He made a couple of more birdies than I did. He played well, and he's advancing.''

McIlroy, the No. 1 player in the world, built a 2-up lead early in the match until Lowry rallied and grabbed the momentum by chipping in for birdie on the par-5 11th to avoid falling behind, chipping in from behind the 12th green for birdie and then ripping a fairway metal to within a few feet for a conceded eagle on the 13th to go 2 up.

Lowry missed a short par putt on the 14th, only for McIlroy to give away the next hole with a tee shot into the desert and a bunker shot that flew over the 15th green and into a cactus. But the two-time major champion hung tough, coming up with a clutch birdie on the 16th to stay in the game.

McIlroy nearly holed his bunker shot on the 18th, and Lowry followed with a steady shot out to 4 feet and calmly sank the putt.

For McIlroy, more questions are sure to follow him to Florida for his road to the Masters. He now has played only 54 holes in the first two months of the season, missing the cut in Abu Dhabi and losing in the first round at Dove Mountain.

''You want to try and get as far as you can, but I guess that's match play,'' McIlroy said. ''I probably would have lost by more if I had played someone else in the field. It wasn't a great quality match. But it would have been nice to get through and just get another day here and another competitive round under my belt.''

The only other time the top two seeds lost in the opening round was in 2002, when Woods and Mickelson lost at La Costa.

Luke Donald nearly made it the top three seeds except for a clutch performance. He holed a 10-foot birdie putt to halve the 17th hole and stay tied with Marcel Siem of Germany. Donald then birdied the 18th from 7 feet to win the match.

Louis Oosthuizen, the No. 4 seed, rallied to get past Richie Ramsay of Scotland.

The opening round was halted Wednesday after 3 1/2 hours because of a freak snowstorm that covered Dove Mountain with nearly 2 inches. It continued to snow at times overnight, and it took nearly five hours to clear snow from the golf course for the tournament to resume.

Turns out, snow wasn't the only surprise.

''I had to play extremely well to have a chance, and I still kept waiting for that Tiger moment,'' Howell said.

Woods missed short birdie chances at the 10th and 11th, but the real damage came on the 15th when he went long of the green with a wedge in hand. Howell also missed a pair of short putts on the back nine, but he came up big with the putt on the 16th.

''Really, I didn't even realize I was 2 up with two to go until I got right to the tee on 17, and it actually threw me for a bit because I never maybe was really in the moment and didn't quite realize how things were,'' Howell said. ''And as far as beating Tiger Woods, it shows you that match play is crazy. I did have to play a good round. But yeah, it's a bit hard to believe I'm sitting here today.''

Howell and Lowry will have to wait until Friday to find out their opponents.

Carl Pettersson was 1 up on Rickie Fowler through 17 holes when they stopped because of darkness. The winner gets Lowry, who will be fighting some history. Of the previous three players to beat the No. 1 seed in the opening round, all of them lost in the second round.

Howell gets either Gonzalo Fernandez-Castano or Francesco Molinari, who were all square through 15 holes.

• Russell Henley, two months into his rookie season, defeated the hottest player in the field when he took down Charl Schwartzel, who had won twice and finished no worse than fifth in his last six tournaments worldwide.

The opening round of the Match Play is typically the best day in golf. This one took two days, and it was unlike any other.

Nearly 2 inches of snow covered Dove Mountain on Wednesday, and with more snow overnight, nothing had changed when players began arriving Thursday morning. There already was a two-hour delay when they arrived.

''There was a guy building a snowman this morning at 8, and they said they were going off at 10:30,'' Henley said. ''I figured it was going to be awhile''

No one had an easier day than Bo Van Pelt.

Having won six straight holes to go 5 up before snow suspended play on Wednesday, Van Pelt finally got back on the golf course and struck all of two shots - an 8-iron and a 45-foot putt. He won the 13th hole with a par to complete a 6-and-5 win over John Senden of Australia.

And then there was Sergio Garcia. He was one putt away from winning when play stopped Wednesday. He three-putted from 12 feet to lose the hole, and on the 18th hole, Thongchai Jaidee made a 6-foot birdie to send the match into overtime.

On the first extra hole, Garcia removed his cap and was putting his golf ball and tees in the bag as Jaidee settled over a 10-foot birdie attempt. The putt ran around the back edge of the cup, giving Garcia life. He made birdie on the par-5 second hole to win in 20 holes.

So instead of hitting one shot Thursday, he had to play 19 of them. Garcia's was the first match of the tournament. It took him about 30 hours to finish.