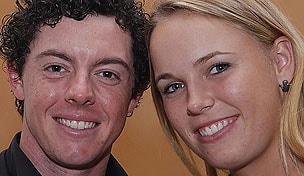 According to Caroline Wozniacki, her first attempt to go running with boyfriend Rory McIlroy didn't exactly go well for the Ulsterman.

'It was quite hot out there. After 15 minutes, I could tell he was really struggling out there,' the tennis star said of their initial 25-minute jog together in Monaco as part of a recent AP report. 'He didn't make it.'

These days, though, Wozniacki says that McIlroy's fitness level has improved – with the world No. 1 sometimes even exceeding her own drive to hit the gym.

'Even in my offseason, I'm like, 'Can you just rest for a second?' I don't want to see the gym. I don't want to hear about the gym ... I just want to relax,' explained the Dane, currently ranked 10th in the world. 'He's like, 'No, but let's go to the gym.' But it's good fun. It's great that we can motivate each other.'

Thus far in 2013, though, McIlroy's play on the course has not matched his reported zeal for fitness. The Ulsterman, who last week denied rumors that he and Wozniacki had broken up, recorded his first top-10 finish of the year at Doral and has only one start, the Shell Houston Open, left on his schedule before the season's first major.

While it's unclear how much tennis Wozniacki has gotten golf's world No. 1 to play, she did admit to hitting balls next to McIlroy during some of his practice sessions on the range, often with mixed results.

'It goes well for a while. Then once it starts going downhill, I take a little break and watch him hit some balls,' she added. 'It's a frustrating game, but I really enjoy it.'