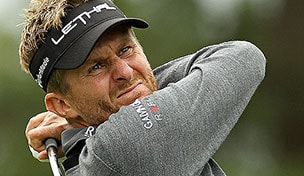 CHARLOTTE, N.C. – With nine made cuts in 14 starts this year, including a title contention so far at this week’s Wells Fargo Championship, David Lynn’s name could be on the short list for early Rookie of the Year candidates.

Except for one little problem: He’s not a rookie anymore.

The PGA Tour enacted a rule six weeks ago that removed such status from certain players who have either played too many events or already achieved status through Special Temporary Membership.

“A player’s rookie season is defined as the season in which he becomes a PGA Tour member (including Special Temporary Members) and plays in 10 or more events as a member or finishes in the Top 125 on the Official FedEx Cup points list, the top 125 on the official PGA Tour money list or qualifies as a top 125-nonmember, whichever occurs first,” states language of the new rule, which was implemented during the Arnold Palmer Invitational. “Further, for purposes of this definition, a new member (including Special Temporary Members) shall not be eligible for the PGA Tour Rookie of the Year if he has previously played in more than seven official PGA Tour money events as a professional in any prior season.”

Lynn is one of a half-dozen players who lost their 2013 rookie status because of this rule, along with Martin Kaymer, Nicolas Colsaerts, Patrick Reed, Peter Hanson and Ross Fisher.