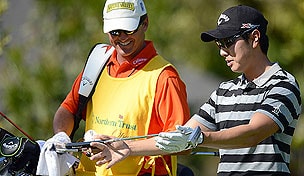 LOS ANGELES – Something hangs over Sang-Moon Bae’s head that nobody else on the leaderboard at the Northern Trust Open must worry about.

If Bae doesn’t win a major championship or medal in the Olympics, he may be forced to take a sabbatical in his golf career to serve a stint in the South Korean military.

Military service is quite the serious responsibility in South Korea and exemptions are difficult to come by. Men become eligible to serve at 21 but the duty can be pushed back to 31, according to Bae’s management team.

Bae, 26, has yet to serve. Winning a major championship, or an Olympic medal, makes him more eligible for an exemption.

Bae put himself in position to win another nice prize this weekend. With a 6-under-par 65 Friday at Riviera Country Club, Bae moved atop the Northern Trust Open leaderboard.

“I’m leading now, and it really means a lot,” Bae said. “I’m only playing two years on the PGA Tour. I will do my best tomorrow and Sunday.”