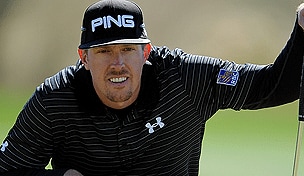 Getty Images
MEMPHIS, TN - JUNE 13: John Daly reacts o his putt on the 17th green during the final round of the St. Jude Classic at TPC Southwind held on June 13, 2010 in Memphis, Tennessee. (Photo by John Sommers II/Getty Images)  -

Despite weather woes earlier in the week, proceedings at the WGC-Accenture Match Play Championship are back on schedule, as four players will vie for the Hagen Trophy Sunday.

While the tournament resumed Saturday morning with 16 players still in the mix, by the end of the day only four were able to win both of their matches and advance amid ideal conditions at Dove Mountain. Matt Kuchar was the first player to punch his ticket to the semifinals, first overcoming Nicolas Colsaerts in the morning, then downing another bomber, Robert Garrigus, in the afternoon session. Garrigus, who ousted Fredrik Jacobson in the third round, trailed at no point during his first three matches but was never able to lead against the reigning Players champion.

The second player to advance Saturday afternoon was Ian Poulter, who defeated Tim Clark, 5 and 3, and Steve Stricker, 3 and 2, to claim the Snead Bracket. Poulter, who won this event in 2010, improved a stellar match-play record that was much-lauded following his performance at last year's Ryder Cup. In defeating Clark, the former Players champion, and Stricker, who turned 46 Saturday and defeated Scott Piercy, 1 up, in the morning's best match, the Englishman improved to 19-3-2 in match play format since 2010.

Despite entering the week as an 11 seed, Jason Day was able to emerge from the Jones Bracket, defeating two major champions Saturday in the process. His morning win came over reigning Masters champion Bubba Watson, 3 and 1, while his quarterfinal was a hard-fought 1-up win over Graeme McDowell, who earlier had defeated the tournament's lowest remaining seed, Shane Lowry. The Aussie will now square off with Kuchar in Sunday's semifinal match, seeking his first career WGC title.

The day's final match went to Hunter Mahan, who remains alive in his bid for back-to-back titles at Dove Mountain. After a 5-and-4 morning win over Martin Kaymer and a slim, 1-up victory over Webb Simpson in the quarterfinals, Mahan has now won 10 straight matches in this event across the last two years. Simpson, who outlasted Gonzalo Fernandez-Castano in his third-round match, was the first player to push Mahan past the 15th hole this week, but ultimately the defending champion stayed alive. Looking for his third career WGC title, Mahan will square off with Poulter in the semifinals, a match that will pit against each other two players who know exactly what it takes to win this event.