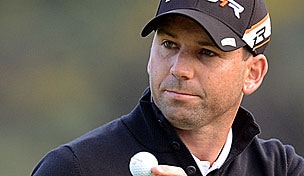 MARANA, Ariz. – Talk about icing your opponent. When play was called on Wednesday because of a snowstorm, Thongchai Jaidee was 2 down to Sergio Garcia with the Spaniard facing a 12 footer for birdie at the 16th to end the match.

Roughly 27 hours later Garcia three-putted the 16th and watched as Jaidee rolled in a 3 footer at the 18th to force extra holes; but El Nino rallied with a two-putt birdie at the 20th hole to advance to Round 2.

Jaidee had a chance to end the match on the first extra hole but lipped out a 9-foot putt for birdie at the 19th hole.

Garcia’s match was the first to go extra holes at the WGC-Accenture Match Play Championship, which was delayed by a storm that dumped 1 ½ inches of snow on Dove Mountain on Wednesday.

“I tried to make the putt (at No. 16) and hit it a little bit and it was much faster than I thought,” said Garcia, who dropped his Day 1 tilt last year at Dove Mountain. “He probably deserved to make (the putt on the 19th hole) after what I did on the 16th.”

Garcia will face Matt Kuchar in the second round, which is scheduled for Friday.