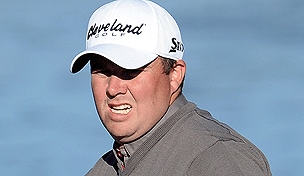 Getty Images
Soren Hansen in action during the third round of the 2005 BMW Championship at Wentworth Golf Club's West Course. May 28, 2005Photo by Pete Fontaine/WireImage.com  -

MARANA, Ariz. – It turned out to be one too many Northern Irishmen for Shane Lowry. On Thursday the 68th-ranked player in the world defeated world No. 1 Rory McIlroy, 1 up, but couldn’t keep the magic going on Saturday against Graeme McDowell.

After a fast start Lowry slowly drifted away from G-Mac in Round 3 and was 4 down when the group made the turn. Lowry made just one birdie the rest of the way and lost, 3 and 2.

The defeat temporarily ended the Irishman’s drive for a spot in the WGC-Cadillac Championship. Lowry needed to advance to the semifinals to qualify for the WGC in two weeks at Doral, although he can still crack the top 50 in the World Ranking before the March 4 deadline but only if he qualifies for next week’s Honda Classic.

Lowry plans to play a qualifier on Monday to earn a spot in the Honda and his next scheduled start is the Puerto Rico Open, which is played opposite the Cadillac, where he has a sponsor exemption.