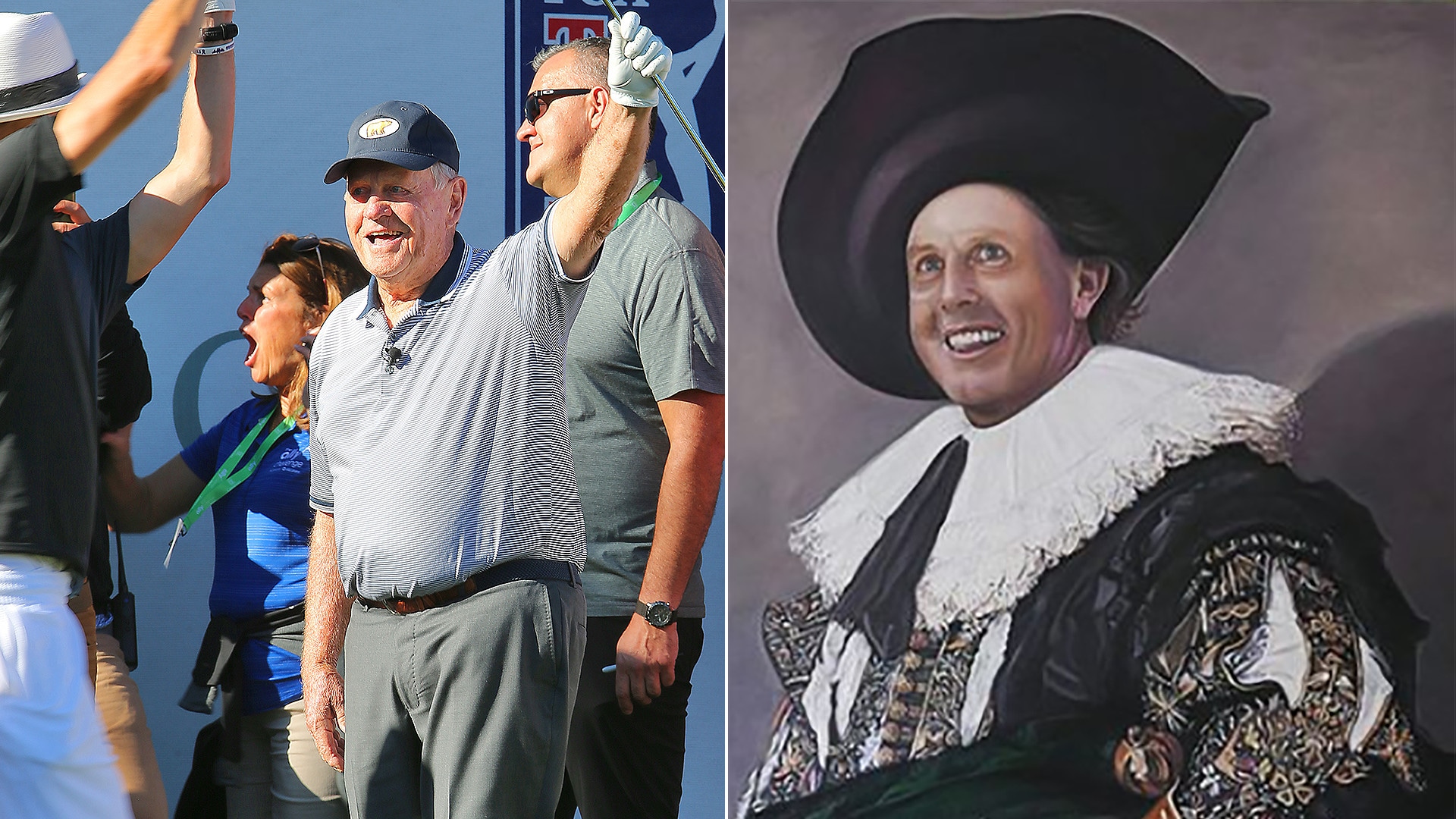 Suzann Pettersen goes out a hero with the respect of the golf world, Jack Nicklaus is still Jack Nicklaus, and golf art that you didn't know you needed in your life is here, and it's spectacular.

One of the best finishes in golf history happened over the weekend, as Suzann Pettersen went from questionable captain’s pick to European hero at the Solheim Cup.

After taking nearly two years off in relation to the birth of her first child, Pettersen returned to the biennial event that helped define her career, holing the cup clinching putt and then riding off into the sunset, announcing her retirement from professional golf.

It was a Hollywood ending, and what made it even better was the outpouring of love and respect on social media from everyone in the golf world, even those on the losing U.S. team.

A mother.
A teammate.
A Solheim Cup stalwart.
A winner.
A legend.@suzannpettersen #ItAllLedToThisMoment

I’m so happy for you Tutta, what a way to go out! I’m going to miss having you out, you have truly been an inspiration to me. Enjoy this next chapter of your life ❤️ Jeg elsker deg

That was gut wrenching... SO PROUD OF MY TEAM! Huge congrats to @suzannpettersen @SolheimCupEuro for a massive win! Given the news of Suzann’s retirement couldn’t me more pleased for her to finish with that putt ❤️ what a match!!!!

This is what golf is about! Win, lose, draw... I’m proud to be a part of this moment ❤️ this @2019solheimcup represented everything great about the game! pic.twitter.com/frPT7aSCYa

WHAT A FINISH. That was the absolute perfect way to cap off @suzannpettersen ‘s amazing career. https://t.co/b3zmLiWqbR

Plenty of team events in recent years have been overshadowed by rules incidents, poor fan behavior and (to put it nicely) bickering between teammates.

We were due for a classic, and the Solheim Cup delivered, all the way down to sportsmanship.

STATE OF THE ART

There's a good chance you didn't know you needed to see a painting of Phil Mickelson dressed as a 17th century Dutch painter, or Tiger Woods fist pumping in his iconic Sunday red while riding a stallion, but since you're already here, you might as well take a peak. You won't regret it.

Artist Matt Landers, who specializes in oil canvasing, had a few of his pieces go viral this week, starting with his "Masters collection," which is his "favorite Masters tournament winners in scenes, settings, compositions or even dress inspired by, or paying homage to five different works by my favorite ‘old master’ painters."

Naturally, Landers started with Mickelson as Dutch painter Frans Hals' "Laughing Cavalier," which he has dubbed "The Laughing Calf-alier." (Get it?)

My 2nd painting from my ‘Masters collection’. A series of works where I am painting 5 of my favourite @themasters tournament winners in scenes, settings, compositions or even dress inspired by, or paying homage to 5 different works by my favourite ‘old master’ painters. This one is @philmickelson as Dutch painter Frans Hals ‘Laughing Cavalier’ 100cm x 120cm Oil on canvas. I’ve called this one ‘The Laughing Calf-alier’ in honour of Phil’s 5 part calf workout. I’m only on part 3 as I can’t get anyone to spot me for part 4 but nonetheless, it’s changed my summer. Activating the calves while painting has transformed my brushwork, especially in areas of high detail. Painting bombs. However, the initial inspiration was simply that I thought ‘The Laughing Cavalier’ was just a perfect way to sum up one of my boyhood hero’s personality and how he plays the game of golf. @mizzenandmain @callawaygolf @workday @kpmg @pgatour @castlegalleries @whitewallgalleries . #lefty #phil #laughingcavalier #franshals #golf #art #artist #oilpainting #calveslikeadonis #philsnotmine #michaelhardingpaints #philkwondocalves #10reps #eachside #detail #monday #artfortheswingstudio #artfortheclubhouse #instaart #gallery #artists

But from a quick look at his Instagram profile, Landers appears to have a thing for golf art, as he's painted/drawn/sketched several other prominent figures from the golf world, including Woods, Brandt Snedeker and Jim Furyk.

“To Augusta!” 100cm x 120 cm. Oil on canvas. Here’s my first painting from a series I decided to work on 3 years ago. I wanted to combine my two great passions (obsessions), Golf and painting. I have been working on these as and when I can. I now have 5 (quite large) paintings of which 2 are complete and 3 are not far away! The idea was to paint 5 of my favourite @themasters golf tournament winners in scenes, settings, compositions or even dress inspired by or paying homage to 5 different works by my favourite ‘old Master’ painters. ‘The Masters Collection’. So here’s my first. I’ve painted @tigerwoods set into my version of the famous painting by French master Jacques-Louis David “Napoleon at Saint-Bernard pass” I’ve stayed true to my own style of painting but I’ve also hinted and experimented in certain passages, a nod to the styles and brushwork of the old masters techniques. A sort of ‘cover version’ if you like of some absolute timeless classics. . #jacqueslouisdavid #tigerwoods #art #artistsoninstagram #oilpainting #originalart #paintings #instaartist #artcollection #gallery #artsy #thursday #michaelhardingpaints #fellorfyourchair #howsyourpap #artoftheday #artlovers #golf #tiger #pgatour #themasters #comeback #goat @tigerwoodscenter @pgatour @europeantour @bridgestonegolf @castlegalleries @nikegolf @monsterenergy @heromotosports @whitewallgalleries

Sometimes things just come along that you can't unsee and they put a smile on your face forever. Landers' art is one of those things.

And if you're not really into art, well then James Franco has a few words for you.

Aphibarnrat was spotted practicing shirtless late last week, and while it may be unconventional, he did have a good reason, tweeting simply, "It was really hot."

It was really hot. https://t.co/PohmDlaVRh

While the four-time European Tour winner may have violated every golf course dress code out there, it's important to note that he'd fit right in on spring break.

Nothing to see here. Just a quarterback helicopter spinning 9 feet in the air.

GARRETT SHRADER WENT FOR A SPIN AND ALMOST GOT THE FIRST DOWN pic.twitter.com/yarvDtkE15

Tommy Fleetwood and Francesco Molinari were not just some flash in the pan.

It's been about a year since they took the Ryder Cup by storm, but their bro-mance is still going strong, evidenced this week by a promotional video for the BMW Championship.

In an Instagram video posted Monday, Fleetwood and Molinari answer questions from real fans while riding in a BMW (obviously), including a Rory from Northern Ireland, a Bryson from California and an Ian from England.

Setting the mood for a "bromantic" dinner, @officialtommyfleetwood and @chiccogolf answer a few questions from some very important fans and even dropped a hint on how to win the BMW PGA Championship. #bmwpga #bmwgolfsport #drivenbypassion

While the setup is obvious, it's nice to see these guys still having fun at their own expense. And based on their personality (or lack thereof) it doesn't appear like the jokes will end anytime soon.

SPEAKING OF STILL HAVING IT ...

If your life depended on picking someone to hole an impossible golf shot, Jack Nicklaus in his prime would be near the top of that list ... only slightly behind 79-year-old Nicklaus.

The Golden Bear turned back the clock last week - not once, but twice - holing two ridiculous shots to win events and some money for charity.

Nicklaus posted both shots on social media (wouldn't you?), making a putt from well off the green on the final hole to win a pro-scratch event in Indiana, and then followed it up a few days later by holing his shot in a chip-off to win the Ally Challenge Celebrity Shootout with teammate Kid Rock.

Good way to end the day! Promised partner & longtime friend Tom Kelley I would share our fun with you. Tom & I won the Legends Division (small field😉) today in the 2-day @sycamorehillsgolf National Pro-Scratch Invitational. Wanted to make sure on 18 that we didn't lose in a scorecard playoff! 😳

Told Barbara that I don’t think I have any magic left in me!‬ ‪18th hole. $15k carryover—all for charity! Chip-off to break a tie, with @dierksbentley & Henrik Zetterberg holding slight lead over my partner @kidrock (Bob Ritchie) and me.‬ Then I got a little lucky!‬ And Bob was a little happy! 😁 ‪@allychallenge ‪@pgatourchampions ‪ ‬

Nicklaus, as he tends to do, played it off as dumb luck.

Must be nice getting that lucky on the golf course for the better part of a century.

Remember all that sportsmanship talk? Well, Jimmy didn't get the memo.

Luckily, the U.S. Solheim Cup team's Marina Alex put him in his place.

There’s always one absolute knob out there. Hi Jimmy 👋🏼 thanks for kindly stepping up and being that person. I didn’t lose the cup @suzannpettersen won the Cup. If you watched our match maybe you’d see there weren’t any bad shots 🤦🏽‍♀️🤦🏽‍♀️🤦🏽‍♀️ #troll https://t.co/sid5F0hAJi 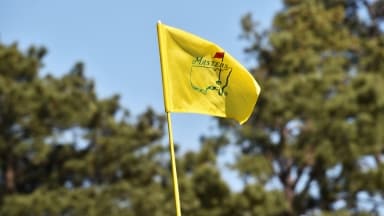 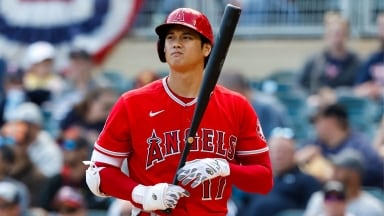 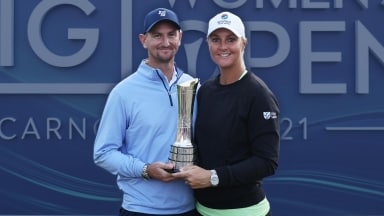