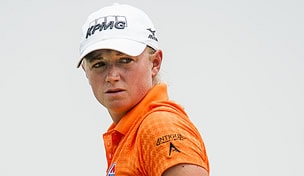 RANCHO MIRAGE, Calif. – Stacy Lewis has a marvelous All-American girl smile, but she has an equally wonderful scowl.

At Yani Tseng’s best in her reign as Rolex world No. 1, her smile was practically a weapon.

It could be that unnerving to fellow tour pros.

“It’s scary,” Na Yeon Choi once said. “You can see Yani’s confidence in her routine. She walks to her ball with a smile. She never looks nervous.”

As the new Rolex No. 1, Lewis’ scowl is as woven into the fabric of her success as Tseng’s smile was.

While Lewis can light up a gallery flashing her All-American smile, she needs her scowl. She needs to thump her bag with a club once in a while. She knows her fiery nature, her feisty refusal to accept mistakes, is part of the DNA that is driving her rise to the top of the game. She understands her scowl, its place in her game, even as she seeks to tame what’s behind it.

Lewis has honed a formidable all-around game in winning six times in the last nine months, but there’s still another level she’s seeking. She wants to win more major championships, and she’s tweaking her temperament as much as her game in a bid to do that.

Lewis won her first and only major beating Tseng at the Kraft Nabisco Championship two years ago. Lewis is the favorite to win it again this week. This might be the major that most suits her. Lewis has finished T-5 or better three times in five starts at Mission Hills’ Dinah Shore Course. Lewis, though, wants to shore up her game to better suit all the majors, especially the U.S. Women’s Open, a prize dear to her.

The scowl will always have its place in Lewis’ game – she knows that, but she also knows the internal frustration that fuels that scowl can hurt her most in majors, where the setups are the most demanding, where frustration builds the fastest.

“The U.S. Open is such a mental test,” Lewis said. “I think that’s one of the reasons the South Koreans have done so well. They’re so mentally strong, very steady, and I tend to get a little emotional out there. So, it’s not my forte, but it’s something I’m working on and I want to get better at.”

“I can get all over the radar with highs and lows,' Lewis said. 'I want to get better at managing that.”

This is Lewis at her analytical best, studying what works, understanding who she is and what she can be.

Controlling her emotions, she believes, is as important as controlling the golf ball.

“We talk about it pretty much after every tournament,” said Dale Lewis, Stacy’s father. “She understands a lot of that is what has made her as good as she is. She wants to temper it, but she doesn’t want to lose that feeling that if I do make a mistake, I’ve got to fix it. But, she is improving.”

Dale could see it at the Kia Classic two weeks ago, Lewis’ last start after winning the RR Donnelley LPGA Founders Cup and seizing the No. 1 ranking. Lewis closed with a frustrating 73 at Kia and tied for ninth.

“I told her on the back nine at Kia, she hit three shots that were worse than anything she hit in the two days I saw her play at Phoenix,” Dale said. “I was expecting to see a lot more reaction from her than I did. She said, ‘You know, I was really proud of how I handled myself on the back nine. It would have been really easy to take my putter and hit my bag, but I didn’t do it. I think I kept myself fairly calm, but I did go in the locker room and beat myself up pretty bad for about a half-hour afterward.’

“She’s not totally there, but she’s getting better.”

Controlling emotions under pressure also ought to help Lewis deal with the demands of being No. 1.

She said the new demands after she won Phoenix were significant.

“It’s been chaos, with all the requests and all the attention,” Lewis said. “I expected it, but it was a little overwhelming. I was glad we had a week off last week so I could clear my head and get away and take some time off and just clear my head. Coming back this week, I feel really relaxed.”

When it comes to the demands that go with being No. 1, Lewis doesn’t want her scowl for those duties. She wants to enjoy them.