Lewis could lose No. 1 to Tseng, Choi at Kraft 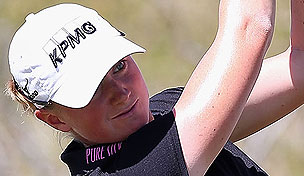 RANCHO MIRAGE, Calif. – Yani Tseng’s 109-week reign as No. 1 ended three weeks ago, but she has a chance to grab it back this week.

Tseng will return to No. 1 with a victory at the Kraft Nabisco Championship, regardless what new No. 1 Stacy Lewis does, according to the world-ranking scenarios released by the LPGA.

Tseng and Na Yeon Choi both have opportunities to wrestle the top spot away from Lewis.

“The first question I was asked when I became No. 1 was how long I was going to stay there,” Lewis said. “I can’t even think about that.

“There are so many things that I can’t control. I can’t control how Yani plays, how Inbee Park plays. If they go out and play better than me, then I lose the No. 1 ranking. If I go out there and take care of myself, I’ll be at No. 1.”

Choi can become the eighth different player to rise to No. 1 with a victory this week if Lewis finishes fourth or worse.

It won’t come as a surprise if the year’s first major comes down to a Tseng-Lewis duel. They both have excellent histories on the Mission Hills Dinah Shore Course.

Lewis beat Tseng in a Sunday duel at Kraft two years ago and has finished T-5 or better in three of her five starts here.