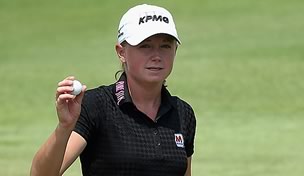 CARLSBAD, Calif. – Stacy Lewis got to enjoy the perks of being atop the world rankings, including being announced as No. 1 on the first tee and seeing her caddie wearing the special bib.

She birdied her first three holes in the Kia Classic and then, well, didn't quite play up to her top billing.

Lewis, who took over the No. 1 ranking from Yani Tseng after winning the LPGA Founders Cup in Phoenix on Sunday, shot a 2-under 70 and was four shots behind leader Jane Park at Aviara.

Park, who lives in Rancho Cucamonga and went to UCLA, shot a bogey-free 6-under 66 for a one-stroke lead over Caroline Hedwall and Karrie Webb.

''It was a little frustrating,'' Lewis said. ''I definitely didn't hit the ball the way I would have liked today, but I made some really good putts and putted this type of greens better than I've ever putted them before. I'm excited about that but I've just got to work a little on the swing.''

Lewis is trying to win her third straight tournament.

''Every time you win you come back the next week on Thursday. It doesn't matter anymore and you're starting all over,'' she said. ''We've just got to get back to work. We have a major coming up; lots of majors coming up this year still, so we're just trying to keep getting better.''

On the par-3 14th, Lewis hit a weak slice into the water. After taking a drop, she chipped up and made a 5-foot putt.

''It was kind of the way my swing's been feeling all day. It felt off all day,'' Lewis said. ''I had kind of gotten away with it most of the day and just didn't there, but I still made bogey so it didn't really hurt me too much.''

Park started on No. 10 and made the turn in 2 under. After a par on No. 1, she birdied four of the next five holes.

''The weather was fantastic today, like it always is in San Diego, and I just wanted to take advantage of that and the fresh greens this morning and fortunately I made a ton of putts today,'' Park said. ''I just love this style of golf course, so maybe that's why I played pretty well today.''

Hedwall birdied six of the first eight holes but double-bogeyed the par-5 10th when she hit her tee shot into the water along the left side of the fairway, took a drop and hit into the water again. She birdied Nos. 11 and 13 before bogeying the par-4 16th.

Jessica Korda bogeyed No. 18 to miss a chance to join Hedwall and Webb at 5 under. Korda was two back with Giulia Sergas.

Michelle Wie opened with a 74, including two double-bogeys, after missing the cut last week in Phoenix. In 13 rounds this year, the Kia endorser has broken 70 only once, closing with a 69 in Singapore after a third-round 77.

The Kia Classic moved to the 6,593-yard Aviara after two years at La Costa and one year at Industry Hills.