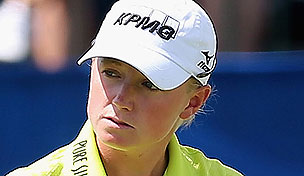 RANCHO MIRAGE, Calif. – Rolex World No. 1 Stacy Lewis is headed from one major to another next week.

Lewis, who couldn’t work her way back into contention after a triple bogey in the opening round of the Kraft Nabisco, posted an even-par 72 Sunday. She was tied for 32nd when she signed her scorecard.

The LPGA won’t play again for two more weeks at the Lotte Championship in Hawaii, but Lewis will be busy at another major. She is going to Augusta, Ga., and the Masters this week, where she will receive the Golf Writers Association of America’s Female Player of the Year award.

Lewis’ No. 1 ranking isn’t in jeopardy with Monday’s release of the newest Rolex rankings. She wasn’t overly concerned about her play at Mission Hills.

“There are just a lot of events to play still,” Lewis said. “I've won twice already and just kind of gotten off to a really good start. So, I'm excited. We still have four majors left, and Solheim is probably even a higher importance than those majors. We've got a lot of good stuff coming this year.”