Sure bet: Spieth shows he belongs on PGA Tour 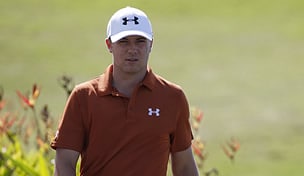 ORLANDO, Fla. – Except for the size and noise level of the crowd and the significance of the stage, the moment was reminiscent of 17-year-old Justin Rose chipping in on the final hole at Royal Birkdale in 1998 to tie for fourth in the British Open.

This was much more valuable for 19-year-old Jordan Spieth.

He needed a birdie on one of his final two holes in the Tampa Bay Championship to complete an amazing trip through four countries in four weeks and essentially lock up a spot on the PGA Tour for the rest of the year. His ball was in the rough to the right of the 17th green. With a smooth swing, Spieth produced a flop shot that came out pure and rolled into the cup for birdie.

He followed with a 7-foot par putt on the 18th, a rapid-fire pump of the fists and a tie for seventh that was worth $148,893, pushing his Tour earnings to $521,893 for the year and giving him special temporary membership.

As he sat near his locker at Innisbrook scrolling through text messages, the mention of Rose didn't register immediately. That was a long time ago in his world.

That was the same year another polished talent from Dallas who went to the University of Texas – Justin Leonard – turned pro and did well enough in seven starts to earn a Tour card without ever going to Q-School.

Spieth still has a ways to go. He probably needs another $150,000 or so to secure a full card for next year. He technically would not fall into that group of players who never went to Q-School – Gary Hallberg, Tiger Woods, Phil Mickelson, Leonard, Ryan Moore and Bud Cauley – because Spieth failed to get out of the second stage last year when his putter let him down. He was still an amateur, still a Longhorn.

Spieth has faced a couple of forks in the road since then, and he keeps making the right turn.

Instead of returning to Texas for the spring season and a chance to repeat as NCAA champions, his heart was set on turning pro, hopeful of getting a mixture of exemptions on the Web.com Tour and PGA Tour to see where it would lead.

He started in Panama and tied for fourth and then tied for seventh in Colombia. With just over $50,000 in two starts, he was about $4,000 short of earning full status on the Web.com Tour and wanted to go to Chile to lock that up. But he had already accepted a spot in Puerto Rico on the PGA Tour and felt compelled to honor it.

''We sat there for 30 minutes trying to figure it out,'' Spieth said.

He chose Puerto Rico, which turned out to be a great move. Spieth was tied for the lead deep into Sunday afternoon until he couldn't keep up and tied for second, picking up $308,000. The top-10 finish got him into the Tampa Bay Championship, and suddenly his outlook changed.

He took care of the rest on Sunday. The special temporary membership means Spieth can take unlimited exemptions the rest of the season, and that should be no trouble. He already is committed to play three times in Texas – the Houston Open, Texas Open and Byron Nelson – and more exemptions are sure to follow.

Spieth has all the trappings of a future star, though the real measure will be over the course of a year, instead of a month. Success at this level is all about consistency and learning how to cope with failure. There's still a long way to go.

But what a start.

''He's a great kid, obviously very mature,'' Leonard said. ''I can't imagine being out there. I don't even know how old he is – 19? I can't imagine being out here at 19 and to do what he's done. He hasn't just driven a couple hundred miles. He's been to three or four different countries this year already. It's pretty remarkable. It's beyond the game and what happens on the golf course. He's handling himself very, very well.''

In a much broader context, Spieth is another reminder that there was too much hang-wringing over the change in how to get to the big leagues. Starting this year, no Tour cards are awarded at Q-School, only a spot on the Web.com Tour. It took away the instant path to the Tour, and the complaint was that it required even the best college players to spend a year in the minor leagues.

But it can be done. Good play goes a long way.

Ben Kohles last year graduated from Virginia, turned pro and won twice in a row on the Web.com Tour to assure himself a spot on Tour. Luke Guthrie finished up at Illinois and did well enough in a partial Web.com Tour season to earn his card. He played in the final group at the Honda Classic this year.

Spieth had no status anywhere, but he has finished in the top 10 in four straight weeks and already has earned just over $572,000 this year.

''At the beginning of the year, when you know that you only get seven unrestricted exemptions – first of all, it's hard to get seven tournaments in, let alone make enough money to get your card – to be able to do it in really three events ... I never would have guessed that I would get in this quickly,'' Spieth said. ''I feel in control, and I know what it's like to be in contention in a Tour event. I just want to get back and get a win now.''

He finished too late on Sunday to make his flight home to Dallas. He was still excited Sunday night, so instead of going to bed, he got together with his father, his caddie and his agent for a late-night game of poker. They didn't have poker chips, so they used M&Ms. Spieth wound up the winner. No taking candy from this baby.