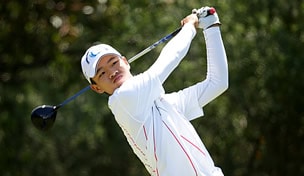 Having already earned a spot to The Masters later this spring, promising amateur Tianlang Guan struggled Thursday in his bid to also gain entry into the British Open.

Playing in a qualifier at Amata Spring Country Club in Chonburi, Thailand – the same course where he claimed the Asian Pacific Amateur Championship last fall – Guan was unable to rekindle the form that helped him become the youngest player ever to be invited down Magnolia Lane.

Guan, 14, fired a 1-over 73 in the opening round of the 36-hole qualifier, placing him seven shots off the pace. With only four players earning spots this week, Guan is now tied for 44th among the 77-man field.

Among those at the top of the leaderboard is Hideki Matsuyama, who played in the Masters after winning the Asia Pacific Amateur in both 2011 and 2012. The amateur carded a 6-under 66 Thursday, having barely missed out on a playoff for the final spot at this qualifier a year ago.

Future international qualifiers for the season's third major will be held at Royal Johannesburg & Kensington Golf Club in South Africa (March 5-6), Gleneagles CC in Texas (May 20), and Sunningdale Golf Club in England (June 24).

The British Open will be held this year at Muirfield in Gullane, East Lothian, Scotland from July 18-21.