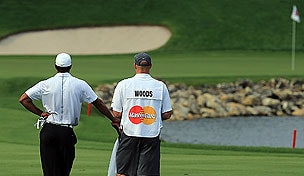 ORLANDO, Fla. – In search of his eighth career title at Bay Hill, Tiger Woods made quick work of the deficit facing him after 36 holes.

Entering the round four shots behind co-leaders Justin Rose and Bill Haas, Woods fired a 6-under 66 to grab a two-shot lead after the third round Saturday, and now stands just 18 holes away from a potential return to the top spot in the world ranking.

Woods began slowly, but three birdies from holes 4-7 helped spark his round. After trailing Rose by as many as five shots early in the afternoon, the seven-time API champion surged to the top of the leaderboard with a birdie on 15 and an eagle on the par-5 16th, his second of the week on that hole.

'I made a few putts today,' said Woods, who carded five birdies and an eagle against just one bogey Saturday. 'I'm very pleased with how I played, especially with the wind starting to pick up towards the middle part of the round.'

Woods now faces a familiar situation tomorrow – a spot in the final pairing on Sunday at Bay Hill, this time with Rickie Fowler. Should he win, he will surpass Rory McIlroy as the top-ranked player in the world, a position he has not held since October 2010.

'Generally our schedules are such that once we figure out what golf courses we like, we tend to play them,' he added. 'There have been a few events over the course of my career where I've played well, and this is one of them.'