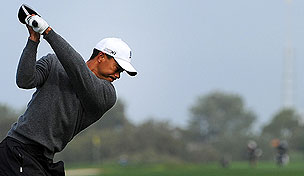 Getty Images
SILVIS, IL - JULY 11: Brandt Snedeker of the USA watches his shot during the continuation of the second round of the John Deere Classic at TPC Deere Run held on July 11, 2009 in Silvis, Illinois. (Photo by Michael Cohen/Getty Images)  -

Displaying the form that led to dozens of runaway wins earlier in his career, Woods fired a 3-under 69 in the third round Sunday, increasing his lead to four shots heading into the final round, which will get under way this afternoon.

Bolstering his lead through solid tee-to-green play, Woods recorded six birdies against only two bogeys on a day when many players struggled with the wet conditions on the lengthy South Course. He leads by four over Brad Fritsch, although tournament officials will not re-pair the field in order to play as much golf as possible after fog delays kept players off the course all day Saturday.

Woods saw his lead expand to as many as six shots, but was trimmed back to four after an uncharacteristic bogey on the home hole. After finding two different bunkers, the six-time Farmers Insurance Open champion bogeyed the par-5 18th hole for the first time in 37 attempts as a professional.

Defending champion Brandt Snedeker rebounded from a disappointing 75 Friday to shoot a 3-under 69, beginning the final round with the same 7-shot deficit he faced last year before winning in a playoff. Starting his final 18 holes before the leaders finished their third round, Snedeker moved to within five shots by the time Woods holed out on 18.

Appearing ready to challenge Woods' advantage early in the day, Nick Watney was 4 under through 10 holes of his third round, getting as low as 11 under overall. He was undone by three bogeys across his final eight holes, though, and faded to 8 under, six shots off the pace heading into the final round.

Thanks to a lack of re-pairing, Billy Horschel and Casey Wittenberg will continue to play alongside Woods despite lackluster third rounds. Wittenberg failed to record a birdie until the 13th hole en route to an even-par 72, while Horschel stumbled to a 4-over 76, seven shots higher than his effort Friday on the South Course.

After making the cut on the number Friday, Phil Mickelson continued to struggle, carding a 3-over 75 during Sunday's third round. He begins the final round tied for 77th among the 87 players who made the cut, 16 shots off the lead.