Tiger's intangibles prove he is 'back' 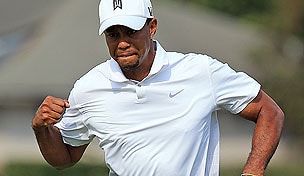 ORLANDO, Fla. – I don’t consider myself a hateful person. But I despise the following question. Can’t stand it. Would rather five-putt from inside the leather than ever have to hear it and think about it and analyze it again.

“Is Tiger Woods back?”

After a third-round 6-under 66, Woods currently leads by two strokes at the Arnold Palmer Invitational, searching for his 77th career PGA Tour victory and eighth at this event. So when it comes to queries about his game, collectively we can do better.

Look, I’m all for an intriguing 19th hole debate in which both parties can state their case and make a cogent point in hopes of convincing the other to change their mind. This question, though, doesn’t do any of that, because it isn’t clearly defined. What is “back” to one person may not be “back” for another. It’s like arguing over the color gray.

Even Woods himself, when confronted with the question earlier this week, maintained, “I think that's based on opinion.”

Me? I'll continue beating the same drum I've been hacking away at for a while now. He has five PGA Tour wins since the beginning of last year. If he's not back, then nobody else is, either.

I get it, though. Whatever “back” means to you, it’s about turning the corner, gaining confidence, getting better. That may or may not be defined in victory totals alone. For those who don’t believe Woods' two wins already this season prove that he has reached that place yet, let’s debunk that myth even further.

Here are four other ways in which Woods is “back”:

He can win without playing his best golf

Don’t believe it? Just check the numbers. At Torrey Pines, he led by four entering the final round, shot 72 and won by four. At Doral, he again led by four, shot 71 and won by two.

Some may examine these stats and contend that Woods no longer has what it takes to press down the gas pedal on Sunday afternoon and pull away from the pack. The more correct way of looking at it is that he’s put himself into positions where he doesn’t need to dominate in the final round. It takes a learned skill to understand how to play a prevent defense and still win easily. He has mastered that skill.

And if Woods goes on to win this week, too, it will only mean he played better than the other 131 players in the field, not that he played his best golf. Though he is admittedly putting extremely well, Woods ranks 75th of the 77 players to make the cut in driving accuracy (52.5 percent) and 64th in ball striking. Following a third round that saw him turn a four-shot deficit into a two-shot advantage, he described his play as “solid” and “halfway decent.”

He can turn it around in a hurry

When Woods flailed and failed in tournaments over the past few years, it was often because one missed putt led to another, or one poor swing multiplied into many.

Perhaps he hasn’t completely corrected this fault, as Friday’s round of 70 ended with three consecutive bogeys, leaving him “hot for a very long time” afterward. Anyone who witnessed the third round, however, understands that his mojo can turn as quickly as ever.

Woods showed signs of getting a little loose on the par-4 13th hole, when he hit an iron tee shot into a left fairway bunker, then a wedge into a back greenside bunker, then chunked a pitch that was slightly plugged and made bogey. Two holes later, though, he rolled in a 17-foot birdie putt with a major-winning type of fist pump, then backed it up with an eagle on the next hole.

He is hardly the only elite golfer who can bounce back from bogey with a few perfectly played holes, but it’s still a strong sign that he’s turned a corner.

He is talking the talk

As someone who has sat through a few hundred Woods news conferences over the years, I’ve played enough Buzzword Bingo to know his go-to comments when things aren’t going his way.

Following the third round, there was no explaining, “It’s a process.” He didn’t contend that he “needs more reps” or is “working on my traj.” He didn’t even implore, “It is what it is.”

Whatever the case, players on top of their game don’t preach patience about working through the process. The fact that he isn’t anymore should speak volumes.

He is turning Saturday leads into Sunday coronations

Those wins I mentioned at Torrey Pines and Doral? Go ahead and say it. It’s OK. No one will think any worse of you.

Let’s face it. They were … boring.

As much as Woods enjoys holing a 20-footer for birdie on the final green to win by a single stroke, he’s turned winning in boring fashion into an art form. With three players – Rickie Fowler, John Huh and Justin Rose – trailing by a pair entering Sunday, he may need to post another strong number to clinch the title.

But if those players falter, if they wilt in the final-round sun, Woods will again understand that steady golf will give him another W. As he knows better than anyone, there’s no reason to fire at flagsticks when mistake-free golf means more hardware.

Well, five wins in the past 52 weeks – and a sixth one possibly impending – should be enough to answer that. If you need something less tangible, though, all of the signs are there. Everything Woods is doing this week – heck, this entire year – shows that he’s reverting to his former form on the course.

Please, I’m begging you: Let’s stop asking that question. I hate it. Even more than five-putting from inside the leather.