Tiger flirting with No. 1 ranking at Bay Hill 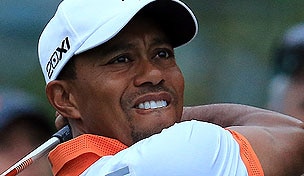 ORLANDO, Fla. – Tiger Woods appears ready for another long-term relationship. After a few years of flirtations and dalliances, he clearly has his sights set on a certain someone once again. She is a figure of power and pride, of mystery and heartache. Everybody lusts after her, not everybody can handle her. But Woods wants his turn. He believes he is ready. She makes him happy. She is the one. Literally.

What, you thought I was talking about Lindsey Vonn?

It’s been exactly 125 weeks since Woods held the top spot on the Official World Golf Ranking for the 623rd week of his career. This Sunday, he can paint that blue period his own special version of red by ending the streak in what would be dramatic fashion.

And yes, he knows exactly what it will take.

It’s fitting, really, that Woods can wrest the title away from Rory McIlroy with a win – and only a win – at the Arnold Palmer Invitational. For years, he has repeated the same mantra for all questions regarding the ranking: Play his best golf, win tournaments and everything else will take care of itself.

He can’t be proven wrong. With five wins since the beginning of last year and two already this year, Woods has shown that not worrying about the ranking may be the healthiest way to improve it. For the rest of us, this is the same thought process behind trying not to look for car keys being the easiest way to find them.

Conversely, when Woods wasn’t playing his best golf, he lost the No. 1 ranking, then dropped out of the top 10, top 25 and even top 50, bottoming out at 58th in the world. Now far removed from that low point, he understands how far his game has come.

“It's been a long process,” Woods admitted. “I was hurt for a long time, and at the same time, I had to make swing changes that were drastically different than what I was doing before. It's taken some time. I fell to 50-plus there for a while. To gradually work my way back, that's something I'm proud of.”

Indeed, it was just one year ago when Woods sat in the Bay Hill interview room prior to the opening round and was peppered with questions about his failure to win an official PGA Tour event in more than two years.

What a difference he’s made in that time.

Not that some of us didn’t see it coming – and not that the tournament host should be considered one of “us.”

Last year, Palmer said of Woods’ game: “If I were making a prediction, I would say, ‘Look out, because one of these days, he's going to come back and play pretty good golf.’”

This year, rather than proffer an I-told-you-so tone, Palmer simply reiterated his previous point: “I think right now looking at him and watching him play, as I have recently, he looks probably as strong and as good from a golf perspective as I've ever seen him.”

If there’s a prevailing tone for Woods’ own analyses of his game over the years, it’s that of discontentment. And it hasn’t changed, no matter the results.

“We're still getting better,” he explained. “Things are still becoming more efficient. These two wins I've had this year, I've built myself some nice leads which means that I've played really well, and things are starting to come around and become more efficient day-in and day-out.”

There’s a definitive mathematical formula to determine world ranking statistics, but if there’s a secret formula to moving up, Woods may have figured it out long ago.

Add it all up and he’s on the verge of reaching a level that was once taken for granted by nearly everybody – except for him.

“As far as getting back to No. 1 and all that entails, it's not easy to get there in the first place,” he said. “I don't think people really realize how hard it is to become No. 1 in the world. But then to then sustain it for a number of years is not easy as well. So it's about winning golf tournaments, and when you don't win, being in the top five and continue racking up points.”

Asked whether he can regain the status at which he once stood – in his game, if not his ranking – Woods was forceful with his words.

It’s been a long time, but Woods is flirting once again. She’s the one – and he wants her back.