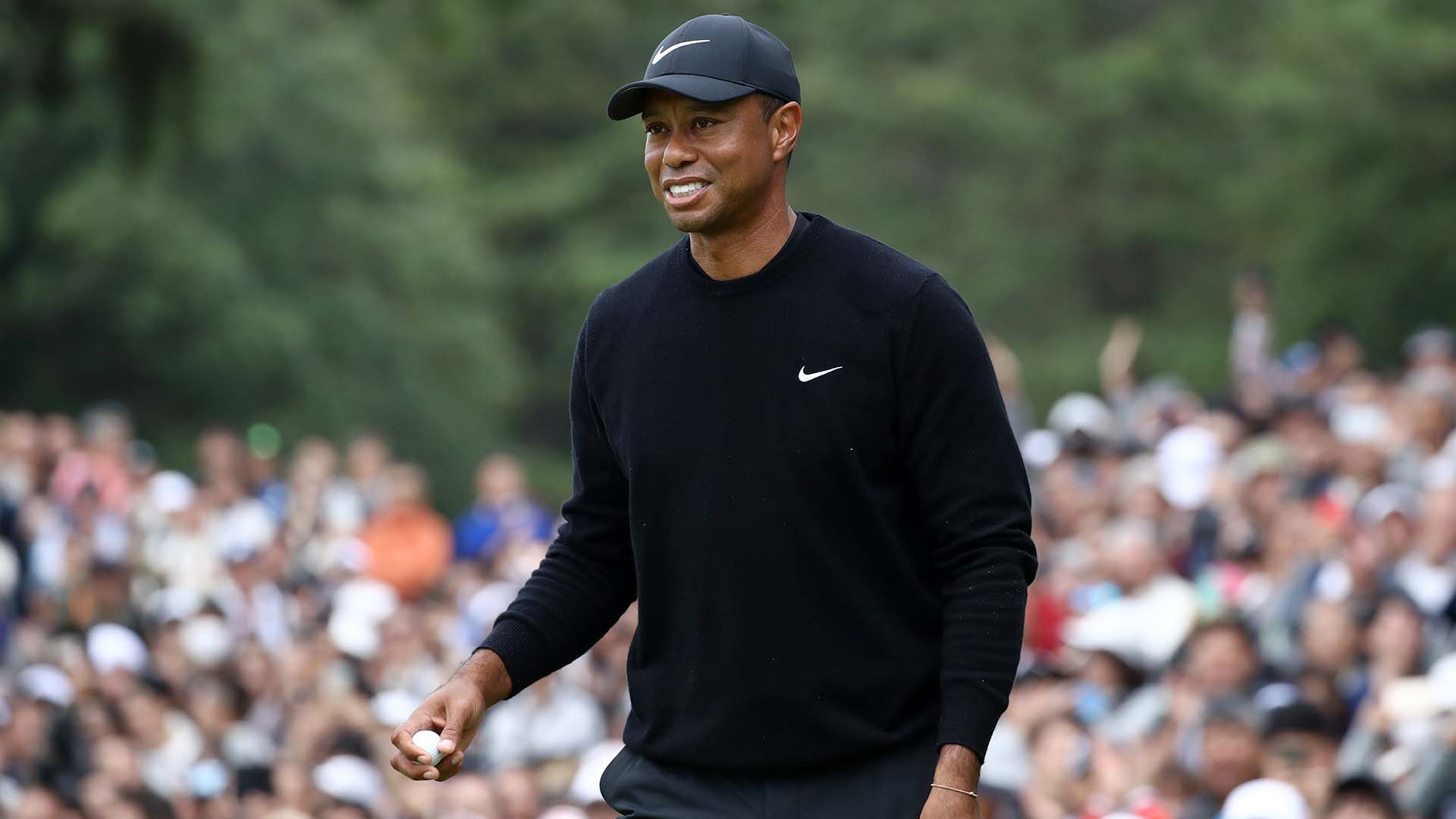 CHIBA, Japan – It’s never been how he starts that’s defined Tiger Woods. Even a cursory glance at his competitive portfolio is proof that being an all-world closer is how you rewrite the record books.

He’s the guy in red and black because of what he does on Sundays; not the guy in subdued earth tones – his go-to early-round wardrobe option – because of how he starts events.

This modus operandi has been amplified by his struggles in recent years and contrasts wildly with Woods' historically impressive performance on Day 1 at the Zozo Championship, which was a wild ride that began with three consecutive bogeys to start the round followed by nine birdies for a share of the lead at the first-year PGA Tour event.

To put that accomplishment in context: when Woods signed for his first-round 64, he was in position to hold a first-round solo lead on Tour for the first time in more than decade. Gary Woodland matched Woods at 6 under with a birdie at his last hole, but that did nothing to diminish what was, at least for Tiger, a landmark round.

“I certainly was not expecting to shoot 6 under par after that start,” Woods admitted. “That was a very ugly start and to be able to flip it like that, I felt that if I could get to under par for the day, I figure most of the guys would be about 2, 3 under par with the wind blowing as hard as it was today and I wouldn't be that far behind.”

But if Woods’ first-round performance was out of character, it was his season-opening effort that was statistically historic. It was the lowest round by two strokes for Woods in a season debut and marked the first time since 2013 that he started his season with a round in the 60s. There was a little bit of everything for Tiger Woods in his season debut Thursday at the Zozo Championship.

In his prime, Woods would arrive for opening day in full flight. It would normally be at Torrey Pines or Maui, and he’d normally win, with seven victories in 22 season debuts since his first full season in 1997. But he wasn’t dominant to start those weeks, at least not like he was on Thursday at Narashino Country Club. It wasn’t as if a slow start was part of his game plan, but there was always a feeling that he was easing his way into the fray.

Even in his most dominant performances to start the season, he never made an early statement like he did on Thursday in Japan. In Maui in 2000 and Torrey Pines in 2003 – each highlight-reel victories for Woods – he carded opening rounds of 71 and 70, respectively.

It’s why Thursday’s round felt bigger. Despite his wayward start, Woods never looked frustrated or overwhelmed. Instead, he had the look of man who knew something others didn’t.

“This is how I've been hitting it at home, so that wasn't a real big surprise. It's a matter of with a scorecard in your hand, you've got to post a number now,” Woods said. “It's actually time to grind out a score.”

Thursday didn’t look like a grind. In fact, after Woods endured his potentially disastrous start, the effort had a breezy feel to it, like it was exactly what he’d expected.

Perhaps this was to be anticipated following another offseason surgery to mend an ongoing ailment that, at least in retrospect, had started to impact every aspect of his game. Woods revealed this week that he’d initially planned to have knee surgery last December but held off following his victory at the 2018 Tour Championship.

“I was trying to make compensations,” he said on Thursday. “Unfortunately, with the lack of movement that I had in my knee, my back took it and that's the last place I want to feel it.”

Since surgery on his left knee in August, Woods has been able to correct those compensations. He can rotate into his backswing better and “clear” into his follow-through. He can squat down and read putts.

“I was able to get down there today, which I've been doing at home, and that's something that if you look at the video towards the end of the season, I wasn't able to do very well,” he said.

The 2019-20 season also marks a first for Woods, who is playing a fall event for the first time since the Tour started the wraparound schedule. Although it’s been nine weeks since his last start, it wasn’t a true offseason and most of that time was spent rehabbing his knee.

In many ways, the Zozo Championship is simply picking up where he left off.

It all added up to the best opening-day effort of Woods' career and a rare fast start for the game’s preeminent closer.