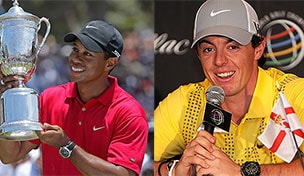 The major math is simple: Woods 14, McIlroy two. The difference between the two numbers are the only assets Woods has that McIlroy should covet. Consequently, Woods should desire McIlroy’s ability to be more forthright and forthcoming.

Never was this more obvious than Wednesday at the WGC-Cadillac Championship when McIlroy sat in front of a gaggle of reporters and answered every question with an honest, thoughtful answer. The world No. 1 was getting peppered with questions regarding his ill-timed WD last week at the Honda Classic, yet handled the heat with the greatest of ease.

“I realized pretty quickly it wasn’t the right thing to do,” McIlroy said. “No matter how bad I was playing, I should have stayed out there.

“I regret what I did. It’s over now and it won’t happen again.”

Most left the interview giving McIlroy the benefit of the doubt.

It was refreshing to see the 23-year-old do what he’s done so many times over the past couple years. At The Masters 11 months ago, McIlroy faced the media before the tournament and poured out his soul regarding heartbreak he experienced at the 2011 Masters when he dominated the first 63 holes and butchered the final nine.

About an hour after McIlroy won the 2011 U.S. Open he was sitting in a fairly empty interview room in the media center waiting for reporters to file in when he busted loose by taking photos of himself with his first major trophy. He had put himself under a Twitter ban for the week and it was finally time to let the excitement of the moment take over and start firing away.

That’s McIlroy, honest to a fault. That’s why last Friday’s explanation that a bothersome wisdom tooth was the reason for walking off the course at PGA National didn’t pass the smell test. If he’d have been as honest in his statement as he was to the reporters he spoke with as he exited, there wouldn’t have been as much of a fuss.

McIlroy righted a wrong. He was contrite. The only time we’ve seen Woods be contrite was following his 2009 difficulties, where being remorseful was the only option.

Sure, Woods commands an audience each time he speaks, but McIlroy commands the room when he’s on that podium. McIlroy genuinely cares what other people think and lets people know that he cares what they think. He gets it.

“Look, we, as in me and all you guys, are hopefully going to have a working relationship for the next 20 years, so I don’t want to jeopardize that by being closed,” McIlroy said Wednesday. “I feel like I’ve always been open and honest and given you guys all my thoughts and everything.

“I don’t want it to be that way where there’s friction between me and the press because at the end of the day, you guys are here because you’re reporting what we do on the golf course all over the world.

“It’s not like I want there to be a strained relationship,” McIlroy said, “because it’s going to be a long one. I hope.”

Add that to the top of the list of words Woods would never speak.

Time will tell if it’s possible to be personable and win major championships at a record clip – Jack Nicklaus largely did it, Nick Faldo did not. Perhaps McIlroy won’t achieve Woods’ heights because he’s too nice a dude. Perhaps he doesn’t have the same killer instinct that has resided in Woods the last two decades. We shall see.

Last week at the Honda Classic, Woods was asked if he had any advice for McIlroy and the pressure that goes with being the game’s top-ranked stud.

“You've just got to be more, just got to think about it a little bit more before you say something or do something,” Woods said. “It can get out of hand, especially when you get into social media and start tweeting and all those different things that can go wrong.”

For years, PGA Tour players have answered questions about Woods ad nauseam and most have expounded on Woods’ importance to the Tour and have thanked him for essentially raising purses, putting more money in their collective pockets. Yet, Woods stood there Wednesday at the WGC-Cadillac Championship and wasn’t able to muster a thoughtful answer about McIlroy’s recent difficulties.

“I really haven’t read much,” Woods said. “I’ve seen a couple things on the ticker, but I’ve been watching other sporting events.

“I’m sure that most of you guys have taken it to him pretty good.”

Some did. But McIlroy walked away earning more respect than he had a week ago.