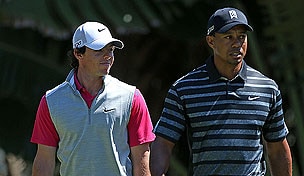 DORAL, Fla. – Much has been made of Tiger Woods and Rory McIlroy’s friendship since the two first played an impromptu practice round together last year in Abu Dhabi and at times during the first two rounds at this week’s WGC-Cadillac Championship the vibe had a relaxed feel normally reserved for practice rounds.

The friendship, it seems, goes well beyond an affinity for South Florida real estate – both live in the West Palm Beach area – and Nike Golf. On Friday, for example, the world Nos. 1 and 2 paused on the ninth tee to discuss swing mechanics.

“We were just talking swing,” McIlroy said. “He just asked me, ‘What are you trying to do?’ and I said, 'Look, just trying to get more inside.'”

In a rare moment of interest Woods addressed the Ulsterman’s current swing woes following Thursday’s opening round. Woods has made indifference to those around him a central element of his persona for years, a competitive firewall that is impossible to question considering his Hall of Fame credentials.

“I don't think he's quite drawing the ball like he used to, that he wants. Maybe just a little bit defensive out there,” Woods said. “That happens, and we have all gone through stretches like this. It happens, and it happened to him last year in the middle of the year, and ended up all right at the end of the year.”

There are many reasons for Woods and McIlroy to be friends, the most obvious being a mutual respect for what it takes to be great, but at their core the game’s top two-ball are golf swing wonks with plenty to talk about.