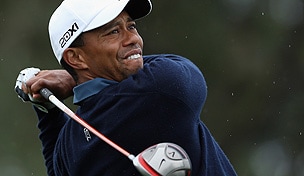 Getty Images
PEBBLE BEACH, CA - JUNE 20: Tiger Woods plays a shot from the rough on the third hole during the final round of the 110th U.S. Open at Pebble Beach Golf Links on June 20, 2010 in Pebble Beach, California. (Photo by Donald Miralle/Getty Images)  -

SAN DIEGO – Through 36 holes, Tiger Woods has shown the type of form you'd expect from a player that has won seven times at Torrey Pines as a professional.

Through impeccable driving and an accurate wedge game despite rainy conditions, Woods dominated the North Course Friday, firing a 7-under 65 to take the lead at the halfway point of the Farmers Insurance Open.

A strong performance off the tee consistently left Woods in position to attack the easier of the two courses in rotation this week, and the 14-time major champion did just that during his second round. After starting slowly, he played a four-hole stretch in the middle of his round in 5 under, a run that saw Woods' name surge to the top of the overall leaderboard.

'I played well today. I drove the ball great and took advantage of the par-5s,' he said after the round. 'That's basically where the round could be had.'

Woods did indeed use his length off the tee to take advantage of the four par-5s on the North Course, making three birdies and an eagle while reaching the green in two shots on three different occasions. On the shorter holes, his wedge game was equally on point, as Woods hit the flagstick with an approach on the second hole and saw another wedge shot lip out on the seventh green. Both resulted in birdies, as Woods' only dropped shot came on the eighth hole, his 17th of the day.

Heading into the weekend, Woods is in position to win this event for the seventh time – and first since 2008, a year that also saw Torrey Pines serve as site of his 14th and most recent major victory at the U.S. Open.