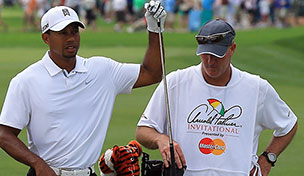 ORLANDO, Fla. – Tiger Woods is one round away from returning to No. 1 in the world.

With key par saves early in his round and an eagle for the third straight day at Bay Hill, Woods seized control Saturday with a 6-under 66 to race by Justin Rose and build a two-shot lead going into the final round of the Arnold Palmer Invitational.

Woods hasn't been No. 1 in the world ranking since the last week of October 2010. That can change Sunday with a victory on a Bay Hill course where he already has won seven times, and from a position where he hardly ever loses.

Woods is 41-2 on the PGA Tour when he has the outright lead going into the final round.

''Just because I've won here doesn't ensure that I'm going to win the tournament,'' Woods said. ''The conditions are different. The game might be different. But the objective is still to put myself in position to win the golf tournament and somehow get it done on Sunday. Over the course of my career, I've done a pretty decent job of that.''

Rose had a three-shot lead on the back nine until he crumbled, making three bogeys over the last six holes.

He didn't even make it into the final group.

Fowler dropped only one shot on a muggy day with a short burst of showers, closing with a par from the back bunker on the 18th. The last time Fowler and Woods were paired together in the final round was at the Memorial, where Woods closed with a 67 to win and Fowler had an 84.

Fowler was only three shots behind going into the final round of the Honda Classic at the start of the Florida swing and closed with a 74. He also had a bad Sunday at Doral (78), though he was never in serious contention. Without knowing where his 67 would leave him at Bay Hill, he sounded determined to finish stronger.

''It was disappointing to play the way I did those two Sundays, but I felt really good with where I was at, putting myself in position to go win a golf tournament or have a good finish and kind of taking myself out of it,'' Fowler said. ''So it was a little bit of a kick in the butt to go out there and finish off tournaments. So I'm looking forward to tomorrow and seeing if we can go do that.''

Nine players were separated by three shots going into the final round, though the dynamic takes on a different vibe at Bay Hill. Woods can tie a PGA Tour record for most victories at one tournament. Sam Snead won the Greater Greensboro Open eight times.

Woods narrowly beat the Spaniard a year ago in the opening round of the Match Play Championship. Fernandez-Castano noticed a big difference one year later.

''He's definitely more comfortable,'' he said. ''I remember at the Match Play, his routine was longer. You could see he wasn't confident with what he was doing.''

Woods has three eagles this week – and six for the year – compared with four eagles all of last season on the PGA Tour.

''I made a few putts, and that's what I was pleased with today,'' Woods said.

Some of the most important putts were for par. Woods finished Friday's round with three straight bogeys, and he started Saturday with a 12-footer for par from behind the cup on the first hole. He poured that in, and it set the tone for the day.

Woods also made an 8-foot par putt on the fifth hole, and a 7-footer for par on No. 8. That was keeping him from losing ground, because there was nothing about the way Rose played that indicated he would come back to the field.

The turnaround was slow and steady, and then shockingly swift.

Rose opened with an 18-foot birdie on the first hole, a tap-in birdie on the third and then a 20-foot eagle putt from just short of the fourth green. At that point, Woods was six shots out of the lead after his two-putt birdie on the sixth. Woods followed with a 7-iron into 2 feet on the seventh, and two tough pars. He got up-and-down from the back bunker on No. 8, and then caught a huge break on the ninth when his tee shot was headed out-of-bounds and hit a tree to stay in play.

Rose slowly began to leak. A three-putt from long range on the seventh. A missed 6-footer for par on the 10th. He still was three shots clear of Woods after a short birdie putt on the par-5 12th, and that's when it changed – and quickly.

Rose three-putted from 60 feet on the fringe at the 13th with a weak attempt at his second putt. Four groups ahead of him, Woods rolled in his 20-foot eagle putt, and just like that, they were tied. Rose compounded his problems with a shot he sliced so badly on the par-3 14th that it nearly went out-of-bounds, and he had to scramble for bogey to fall behind for the first time.

He failed to birdie the 16th, three-putted the 17th and suddenly was a forgotten figure on the leaderboard.