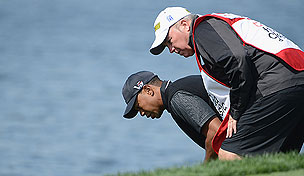 PALM BEACH GARDENS, Fla. – A round that began with great promise for Tiger Woods ended with the world No. 2 right back where he began.

After racing out to three birdies across his first eight holes, Woods was unable to pick up any more strokes the rest of the way, and his early gains were wiped out by a tough-luck double bogey at the 17th. He once again left PGA National with an even-par 70, marking just the third time in his career where Woods shot the same score for each of the first three rounds of a PGA Tour event.

'I was playing really solidly all day,' he said after the round. 'I caught a bad mud ball at 10...then on 17, just stuck it in the ground a little bit, caught the wind and ended up making double.'

Heading to the penultimate hole, Woods was 2 under on his round and had thoughts of a birdie-birdie finish. His tee shot to the par-3 was within 40 feet of the hole but came up short, plugging into the face of a bank below the pin. After several minutes of searching to even locate the ball proved fruitless, Woods was forced back to the tee.

'We didn't know if the ball was in the hazard or not,' Woods explained. 'So you don't know, and then it's a lost ball.'

With prime scoring conditions Saturday morning, Woods came out firing at flags from the start of his third round. An opening birdie was followed by another at the par-5 third, and the holes where Woods missed on the short side he was able to save par, taking only 12 putts on the front nine.

'Realistically, if you play well, you can shoot about five or six under par, there's no doubt,' he noted. 'The greens are perfectly smooth out there.'

Woods' last birdie of the day came at the eighth hole, though, as the putts failed to fall on the back nine. Heading into the final round needing to replicate last year's 8-under 62 to even have a chance to contend, the 14-time major champ insists that his game is not far from where he wants it to be.

'My iron game is pretty good and my short game is way better than it was at Torrey. I feel very comfortable with my putting,' he added. 'I need to obviously get it in play a little bit more and attack from there, because everything else is pretty good.'