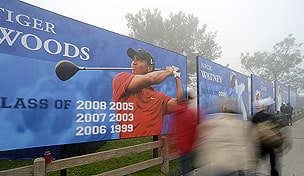 Zeus couldn’t have been more at home on Mount Olympus than Woods is hurling his own lightning bolts around this golf course.

“I have been out here long enough to know that this is part of the game,” Woods said in a statement released by the PGA Tour. “I’ll be ready to go tomorrow.”

With his 7-under-par 65 Friday on the North Course, Woods took sole possession of the lead in his bid to win his eighth professional title at Torrey Pines. At 11-under 133, he’s two shots ahead of Billy Horschel and three ahead of six other players.

The field will return to the course at 7 a.m. PT Sunday to resume the third round, not to re-start it. The Tour’s plan is to play as much golf as possible and finish up on Monday without a 54-hole cut or re-pairing.

Sleeping another night on the lead in a PGA Tour event is no big deal for Woods, who has slept on more of them than anybody but Sam Snead. A bigger deal is that Horschel and Casey Wittenberg have another night to sleep on their pairing with Woods. Also, with the Tour not re-pairing after the third round is complete, Horschel and Wittenberg are assured of playing with Woods for the final 36 holes.

“It’s a pretty cool thing that’s going to happen,” he said. “It’s going to be a fun day tomorrow.”

Wittenberg also sounded up for the challenge.

“We’ll have to get out there and see what we can do,” Wittenberg said.

Horschel, 26, and Wittenberg, 28, are seeking their first PGA Tour titles. Woods doesn’t have a lot of “pedigree” on his heels. Horschel and Wittenberg are among the seven players directly behind Woods on the leaderboard who have never won a PGA Tour title.

Horschel and Wittenberg can only hope Woods’ momentum was slowed by Saturday’s fog delay. Woods is on a roll this week. He rekindled his prowess with the driver over the first two rounds, putting on a clinic with one long, straight drive after another. He ranks first in driving distance for the week (318.5 yards per drive) and, more impressively, fourth in driving accuracy (19 of 28 fairways hit). Those totals make him No. 1 in total driving this week.

The confidence Woods is displaying with his driver isn’t good for the rest of the field. It seems to be filtering into every element of Woods' game. He was sharp in every facet of his play Friday.

Winning at Torrey Pines looms as another kick-start to a big year for Woods. In the six seasons he has won at year’s start at Torrey Pines, he has gone on to win major championships in five of them.