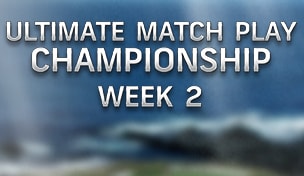 Our 16-man field for the Ultimate Match Play Championship has been whittled down to the Elite Eight.

Some believed that despite 18 career major championship titles, the top-ranked Nicklaus might struggle against fan favorite Phil Mickelson in the first round, but the Golden Bear received 92.8 percent of the votes to move on to the next frame in the bracket as the leading vote-getter thus far.

Nicklaus will face longtime friend and rival Player in the second round. As the No. 9 seed in the tournament, Player barely ousted Walter Hagen, taking just 51 percent of the vote in that match – easily the closest in the competition so far.

“The only way to rank players is through the record books,” Player recently said on 'Morning Drive.' “All I know is he was a very great character. He might have arrived at the tee in his dining suit and I would have arrived after exercising – and he might have still beat me.”

The combined numbers between Nicklaus and Player are astounding. Together they own 97 career PGA Tour victories, including 27 majors. Extend that to global success and they’ve combined for well over 200 wins, easily the biggest total of any of the four second-round matchups.

Much like the NCAA basketball tournament, the match between the 2 and 15 seeds featured a closer-than-expected result. Woods received “only” 78.9 percent of the vote against Ballesteros, though the noted short-game wizard could not extricate himself from trouble against the 14-time major champion.

The tournament’s ultra-intriguing matches continue, as Woods will square off against Watson in the next round. Playing his longtime mentor in the first round, Watson upended Byron Nelson by receiving 54.4 percent of the vote to move on to another much anticipated matchup.

This one will feature Woods playing against the man who will serve as his Ryder Cup captain next year at Gleaneagles – and despite having the same initials and both playing collegiately at Stanford University, they haven’t always seen eye to eye.

Though Watson has criticized him for not always “respecting the game,” he was effusive in his praise for Woods when named captain on Dec. 13.

“He's the best player maybe in the history of the game,” Watson maintained. “My relationship with Tiger is fine. Whatever has been said before is water under the bridge, no issues. … Obviously there's nobody else in the golf world who wanted to win more than Tiger, and he did it for so many years. He dominated this sport unlike anybody in the history of the sport.”

In what was no doubt a frosty match with few words, Hogan defeated Nick Faldo with 88 percent of the vote in the opening round. As the No. 3 seed in the tournament, the Hawk figures to be a tough out because of a legion of fans who still revere his shot-making talents and ability to recover from a near-fatal car accident.

Hogan will meet Arnold Palmer in the second stanza – and Arnie’s Army, too. One of the most popular players of all time, Palmer was buoyed by a 86 percent vote in his victory over Gene Sarazen.

Much like the dynamic between Watson and Woods, Hogan and Palmer also owned a complex relationship, with the elder often failing to recognize the aggressive youngster.

“Well, it was more a standoff relationship,” Palmer said in a 2009 radio interview. “It wasn’t what I would call the warmest relationship in the world, although I certainly had a great deal of respect for Ben Hogan and what he accomplished in the game. I think that it would be safe to say that from a distance we were friends, but we were never very close and of course one of the things that you just mentioned had something to do with that and the fact that it was always ‘Hi fella’ rather than calling me by my name.”

The only amateur remaining in the tournament, Jones took 77.6 percent of the vote against Lee Trevino to continue his pursuit of a title against a field of pay-for-play performers.

Jones will square off against Snead, the PGA Tour’s all-time leading winner, in the second round. Perhaps surprisingly, Snead received the second-highest vote total in the opening round, garnering 90.2 percent to breeze past Billy Casper.

Once again, this second-round matchup will feature two men between whom there was plenty of bad blood. Snead struggled with his putting, employing various methods throughout his career. When he found success using a croquet style in 1967, it was Jones who brought up his contempt for the method with U.S. Golf Association executive director Joseph C. Dey. One year later, the USGA and R&A jointly banned croquet style putting.

Voting is now open for the four second-round matches, with winners announced on Feb. 5.