What We Learned: Riviera provides another classic 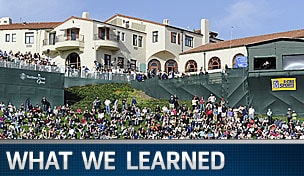 Each week, GolfChannel.com offers thoughts on 'what we learned' from the world of golf. This week, our writers weigh in on Riviera Country Club, which again produced a great finish at the Northern Trust Open, the possibility of the PGA Tour splitting from the anchoring ban and Lydia Ko's impressive performance in Australia.

The PGA Tour is deep – really deep. For much of the weekend, you couldn’t move through the first two pages of the leaderboard without bumping into a player currently inside the top 20 in the world ranking. Down the stretch Sunday, though, it was not one but two players from outside the top 100 who wound up dueling for the title. As the Tour now gets set for arguably its most unpredictable event with the WGC-Accenture Match Play Championship, Sunday served as a keen reminder that the difference between the all-star and the journeyman may not be as pronounced as we once thought.

I also learned that making an exciting birdie on the 18th hole Sunday may not be a winning strategy at Riviera. Just ask Phil, Keegan … and now Charlie Beljan. – Will Gray

Riviera Country Club shouldn’t host another major championship. I say that not because I don’t admire the course; in fact, it’s for the very opposite reason. It doesn’t need a U.S. Open or PGA Championship because the Northern Trust Open has so closely resembled a major in recent years. Leaderboards changing by the minute, players forced to think their way around the course, birdies and bogeys equally possible on every hole – those are just some of the reasons that this is annually one of the best venues on the PGA Tour schedule. Save for Pebble Beach every decade or so, I’ve never been a big fan of hosts for regular events also holding a major in the same year. The Riv doesn’t need one. Once again this week, it showcased itself as one of the country’s preeminent old-style tracks, as the tournament was a terrific amalgam of fist-pumping and relieved smiles and nervy putts and hanged heads. Let’s not be greedy. Once a year is good enough. We’ll get the major experience every time anyway. – Jason Sobel

The proposed anchor ban just got a whole lot more interesting. With the 90-day comment period soon to expire, Brad Faxon revealed in a web column that the Policy Board will convene Monday and that commissioner Tim Finchem likely will recommend that the Board urge the USGA to withdraw the proposed ban of the anchored stroke. That’s a bombshell, even if the USGA doesn’t back down, as Faxon expects. Any resistance from the Tour would undermine the credibility of the USGA specifically and the governing bodies in general. Chalk up an early point for the anchorers. A game-changing decision is on the horizon. – Ryan Lavner

Yes, you could say we learned how poised she was last summer, when she won the CN Canadian Women’s Open, but there was so much more to learn about her in her loss Sunday at Royal Canberra in the LPGA’s season opener in Australia. There was a lot to learn in how she handled the adversity that struck early in the round.  Tied for the lead at Sunday’s start, she could have fallen apart after a clumsy start. With a double bogey at the first hole and a bogey at the second, Ko quickly dropped four shots behind Jiyai Shin. How Ko responded was instructive. With her birdie at the 12th, Ko pulled back even with Shin. Yes, she would stumble again, but her comeback from that nightmarish start tells you everything about Ko’s resilience, about the fight in her that will keep her coming back for more. – Randall Mell