What We Learned: Farmers Insurance Open 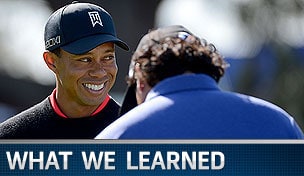 Each week, GolfChannel.com offers thoughts on 'what we learned' from the world of golf. This week, our writers weigh in on Tiger Woods' season-opening win on the PGA Tour and the always-hot topic of bifurcation.

Tiger Woods is setting himself up for a monster year, or so recent history suggests. But in the aftermath of his four-stroke victory Monday at Torrey Pines, questions remain. Was this dominating performance a sign of things to come … or did he merely conquer another personal playground? Is his swing geared to win three, four, five times this year, including a major … or could he simply play (and win) at Torrey Pines blindfolded? Did he falter down the stretch because of slow play … or because there is much work to be done with his full swing? Stay tuned. – Ryan Lavner

That Tiger Woods is at least as good as last year. But I don’t know if he’s any better. Winning this week at Torrey Pines is akin to his victories in 2012 at Bay Hill and Muirfield Village; it doesn’t do much in the way of prophesizing 2013. I hope he’s better than last year. I hope he contends Sunday in the majors. But winning at Torrey Pines for an eighth time doesn’t guarantee certainty. – Mercer Baggs

Bifurcation isn’t the dirty word everyone has been making it out to be for the last decade or so. From PGA Tour commissioner Tim Finchem, who said two sets of rules are possible, to TaylorMade CEO Mark King, who said such a separation is inevitable, the theory of bifurcation gained serious momentum last week. The possibility of a ban on anchoring may not lead to bifurcation, but it certainly led to a long conversation about the possibility. – Rex Hoggard

The biggest key to Tiger Woods’ success this season isn’t something he can work on at the range or the practice green. It’s not a swing tweak or a mechanical flaw or even a physical breakdown. No, his biggest key is how he plays the par-5 holes – and if this week was any indication, he could be on the verge of another big year. From 1996-2009, Tiger was first or second in par-5 birdie percentage each year but '08, when he was fifth. When his ranking in this category slipped, so did his overall results. In 2010, he was 32nd; in 2011, he was 33rd. Last year, he climbed back up to 12th and his game climbed along with it, winning three times. At Torrey Pines, he played the 16 par-5 holes in an astounding 12-under for the week – a number so good that he could have made par on every hole and still won. It’s not exactly something on which he can work, but if Woods continues his domination of the par-5s, expect the success to continue, as well. - Jason Sobel

The way Rory McIlroy ended the 2012 season – with five straight birdies to cap off a victory in Dubai – I was certain he would spend 2013 as an untouchable. He’d won money titles on both sides of the Atlantic. He’d crushed the field at the PGA Championship. He was a young man just beginning to embrace his full potential. An equipment change, a missed cut and Tiger Woods’s four-shot victory at Torrey Pines on Monday has me reassessing things. Rory will find his groove with the new sticks, but how many titles will Tiger have won by then? Will the Rory, who hit 340-yard drives down the middle at Kiawah, return in time to keep Tiger at bay? Will Tiger win his second tournament of his season before Rory gets his first? The '13 season just got a lot more interesting. And the Masters can’t arrive soon enough. - Damon Hack