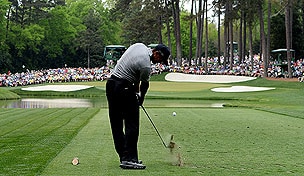 AUGUSTA, Ga. – Tiger Woods shot a first-round 70 Thursday at the Masters, the exact opening score he posted in three of his four Masters victories.

Woods scrambled for par saves twice in the first three holes and rattled off five consecutive pars to open his round. He made birdies on Nos. 6 and 8, and added another on the par-5 13th. He gave one back with a three-putt bogey on 14.

“I played solid today and got a good round out of it,” Woods said.

“This golf course is going to change dramatically by tomorrow,” Woods said, with rain expected to move through the area overnight. “I just need to make adjustments.”

Just before Woods teed off for his round, his new girlfriend, Lindsey Vonn (click here to learn more about the Olympic skier), was spotted in the gallery, along with Woods’ mother Tida and Nike CEO Phil Knight. Vonn was dressed in a sundress and hat and was walking with a noticeable limp.