Winsday Hot List: Scott's hot ... under the collar, too 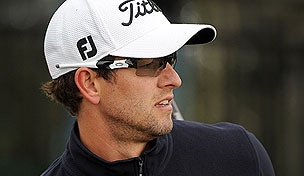 Ask any female who plays the game or watches professional golf, “Who is the hottest golfer on the PGA Tour?” and there is a universal answer. He’s tall, dark, handsome, cute smile and surfs … even guys (admit it) know who we're talking about. But that's not the reason Adam Scott makes this week's Hot List. He gets the nod because he's stepping up and being a man, speaking his mind and communicating honestly and to the point. And that is really sexy. (The Australian accent doesn't hurt either.)

1. Adam Scott: Since 2011, the 32-year-old Australian has anchored a long putter and with all of the heat on the subject of banning anchoring, he's stepped up in opposition.

At Doral last week, he objected to the U.S. Golf Association and Royal & Ancient Golf Club’s proposed ruling saying, 'I can't believe they're making rules based on subjective opinions and not based on any evidence. We're making rules for the betterment of the game based on zero evidence? Incredible.'

He also took the bull by the horns in challenging other players' opinions that differ from his on the issue. Most notably, Tiger Woods. 'A lot of players have been quite outspoken about it and certainly when Tiger Woods speaks about it, it generates a lot of interest … but I'm not necessarily sure his views on what the putters should be are correct at all.

“I don't think the putter should be the shortest club in the bag; that has never been a rule in golf, so I don't know why it should be now.'

2. Medalist member-guest: Tiger Woods is playing a big tournament this week, just not in Tampa, not on television, and not for the general public. In fact, the only way to get in the gate at Medalist Golf Club in Hobe Sound, Fla., to watch him tee up alongside former NFL Pro Bowler and ‘Morning Drive’ co-host Ahmad Rashad, is if you're a member or guest on the sign-up sheet. They will face off against Michael Jordan, a Medalist member, and Keegan Bradley, who replaces Rory McIlroy who was initially slated for the pro spot but has reportedly withdrawn. Lucky for us, Golf Channel’s Gary Williams and Tim Rosaforte are also scheduled to tee it up together, so maybe we'll get the low-down after Friday's match.

3. Sinkhole-in-one: Sinkholes scare the living daylights out of me, especially after watching the coverage of the Florida man who was killed two weeks ago when the earth swallowed him up while he was in his bedroom. I can't imagine being on say, the 14th fairway, as was 43-year-old Mark Minhal in Waterloo, Ill., at Briar Golf Course, when the fairway collapsed 18-feet deep and 10-feet wide. Luckily, his playing partners rescued him by climbing into the hole with a ladder and he emerged 20 minutes, suffering only a dislocated shoulder.

4. USC women: The Trojans top this week's Golf World/WGCA women's Division I coaches' poll, making it the ninth time since the poll resumed in 2001-02 that they've occupied the honor. What's unique about it this week is it distinguishes the USC program as one of the top of all-time, pulling them out of a tie with Auburn. Only Duke (44), UCLA (20) and Arizona State (12) have been ranked No. 1 more times.

5. Crazy socks: Feel free to rock the crazy sock. In honor of President George H.W. Bush, Shell Houston Open’s “First Golf Fan,' according to the Houston Chronicle, the event is encouraging spectators, sponsors and volunteers to wear wacky socks with a contest for the craziest sock, to boot.

6. Michael Jordan, golf guru: In advance of the WGC-Accenture Match Play, the Hot List touched on MJ's mental coaching of  Luke Donald, but he's advising other top pros as well, including Tiger Woods. Rosaforte reported in Golf World, 'When I asked Tiger Woods recently if there was one iconic athlete, entertainment star or business leader who he tapped for advice on life at the top, there was no hesitation: M.J.' Ernie Els thrives on Jordan's mental pressure motivation, too; however, Jordan has a disclaimer, according to Rosie. 'This is all very flattering to Jordan, but he wants everybody to know he is not in the golf instruction business. 'This is where I become uncomfortable,' Jordan said. …'I’m not a golf coach, never will be; won't try to be.’'

7. Presidential golf: President Obama's golfing habits have been taking a lot of heat recently, putting this subject again on the Hot List. New York mayor Michael Bloomberg has weighed in on the issue, saying on CBS's “Face the Nation”: 'I find it fascinating, people criticize him for taking people to dinner – he should be doing that every night. They criticize him for going and playing golf with people who he's got to deal with. He should be doing that every weekend. You always can work better with somebody that you have a chance to build a social relationship with.' Newt Gingrich and Rep. Louie Gohmert (R-Texas) disagree. Gohmert introduced legislation to put a cease and desist on his trips to the golf course unless the White House reinstates public tours.

8. Natalie Gulbis: The LPGA star has spiked concern on the tour as Gulbis' IMG agent, David Livingston, confirmed she has malaria after first getting ill at the HSBC Champions in Singapore. She's sidelined, getting treatment and resting at home under appropriate medications, but for the rest of the LGPA, Scottsdale Healthcare, the founding partner of the RR Donnelley LPGA Founders Cup, is providing blood screenings for other players, caddies and family members.

9. Kiddie golf shoes: Kids don't get too much attention when it comes to golf apparel and footwear, but True Linkswear has introduced a versatile shoe for children named the True Padawan that can be worn seamlessly from the golf course to the playground. The shoe is designed to move with the natural movements of the foot, as if walking barefoot, and retails for $59.99.