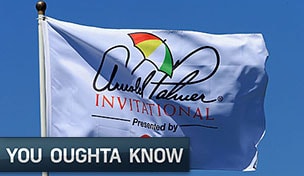 ORLANDO, Fla. – After most of Sunday's final round at Bay Hill was wiped out by storms, Tiger Woods goes into Monday's finale with 16 holes to go and a three-shot lead over Keegan Bradley, Ken Duke, Rickie Fowler and John Huh. Mark Wilson, Brian Stuard, Gonzalo Fernandez-Castano, Thorbjorn Oleson and Justin Rose are another shot back. Here is what You Oughta Know heading into Monday's conclusion of the final round of the Arnold Palmer Invitational, where Woods appears on the verge of his third win this season:

• Woods heads into the final round in position to pad his already illustrious credentials at Bay Hill. A win Sunday would be his eighth at this event, tying Sam Snead's record for the most career wins at a single PGA Tour event. Snead won what was formerly known as the Greater Greensboro Open eight times, with his last victory coming in 1965. Woods has already won seven times at four different events: WGC-Cadillac Championship, WGC-Bridgestone Invitational, Farmers Insurance Open and Arnold Palmer Invitational.

• A win Sunday for Woods will also have implications for the Official World Golf Ranking. Should he leave Bay Hill with the trophy, the 14-time major champion will supplant Rory McIlroy atop the standings. It's a position that he last held Oct. 30, 2010, with Lee Westwood taking over the top spot the following day. McIlroy has led the world ranking since August 12, 2012, a day after his eight-shot win at the PGA Championship.

• Stop me if you've heard this before, but Woods is pretty good with a 54-hole lead. Six of his seven prior API wins have come after holding at least a share of the lead after three rounds, while overall he has converted 51 of 55 third-round leads or co-leads on the PGA Tour into wins. The last time Woods failed to win after holding a share of the 54-hole lead was at the 2009 PGA Championship, when Y.E. Yang won despite trailing Woods by two shots entering the final round.

• Fowler is in the final group alongside Woods, hoping for some redemption from the last time they were paired together for a final round. That was at the Memorial in 2012, a round in which Woods shot 67 en route to victory – while Fowler ballooned to an 84, the highest round of his professional career.

• Englishman Rose appears to be the most likely candidate to break a recent string of American dominance on the PGA Tour that dates back to last season. Since Tommy Gainey won the 2012 McGladrey Classic, Americans have won 14 consecutive Tour events, with Woods the only multiple-event winner during that span. A win for Rose would mark his first victory since last year's WGC-Cadillac Championship, and he appears in position for his third consecutive top-10 finish after tying for fourth at the Honda Classic and tying for eighth in defense of his title at Doral earlier this month.