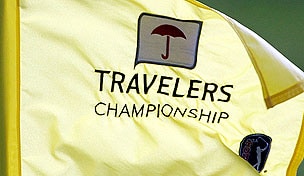 CROMWELL, Conn. – With two co-leaders each searching for their initial PGA Tour win and a recent major champion searching for history, here’s everything You Oughta Know entering the final round of the Travelers Championship:

• Co-leaders Brian Davis and Roland Thatcher competed together during the first two rounds of the week, combining to post scores of 13-under. They will play in the final pairing at 2 p.m. ET off the first tee.

• Davis is seeking his first career PGA Tour victory, but he does own five career runner-up finishes in 237 starts.

• Davis is looking for his fourth top-10 finish of the season, which would tie his personal best from 2009.

• Entering this week, Roland Thatcher had played 23 rounds on the PGA Tour this year. His scores of 66-67-65 are each better than any previous total he produced this season.

• Thatcher (T-1) and Will Claxton (T-6) each attended Auburn University. Jason Dufner, who has won twice this year, and seven-time champion John Huston are the only former Auburn Tigers who have won PGA Tour events.

• John Rollins finished T-2 at the Travelers Championship last year, based on scores of 65-63 on the weekend. He echoed that third-round 65 on Saturday, moving into a share of third place.

• U.S. Open champion Webb Simpson will start his round at 7-under, just five strokes off the lead. He is bidding to become just the 10th player in PGA Tour history to win a major, then win the following week. The last to accomplish the feat was Tiger Woods, who in 2000 followed his PGA Championship victory with another at the NEC Invitational one week later.