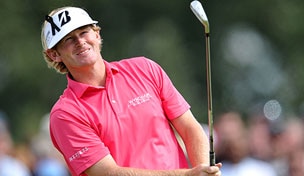 SCOTTSDALE, Ariz. – In second place entering the final round of the Waste Management Phoenix Open, Brandt Snedeker will be playing in the last group of the day.

But at the PGA Tour’s most heavily attended tournament, he knows where he stands with the fans.

“I have no illusions tomorrow who they want to win this golf tournament,” Snedeker said, “which is perfectly fine.”

That’s because he will be paired with local favorite Phil Mickelson, who also happens to own a six-stroke lead and is seeking his third career win at this event.

That said, Snedeker feels like he can use the deficit to his advantage.

“I definitely will be a lot more aggressive tomorrow than I normally am just because 5 under par is not going to do it,” he concluded. “I will have to go at some pins and make some putts early and be more aggressive than I probably normally would be. That's kind of the way the golf course is playing right now. You're not going to make up much ground shooting 4 under par. You need to go out there and shoot low.”

So far this week, Snedeker has posted scores of 64-66-65. He’s finished sixth or better in five of his last seven PGA Tour starts, dating back to August of last year.