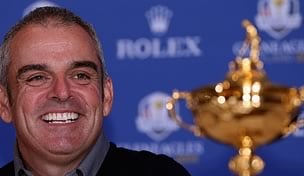 A week before the European Ryder Cup captain was announced, Paul McGinley still considered himself a long shot to get the gig.

“By all accounts (Colin) Montgomerie was in the pole position. Of course I was deflated,” the Irishman said, via a revealing profile by Donald McRae in The Guardian.

“I kept thinking, What’s going to be the reaction of the players if they don’t get their way? Where’s that going to leave team spirit? I didn’t say that to anyone, but those words were going around in my head: ‘Wow, with all the vocal support I’ve had from (Ian) Poulter and (Justin) Rose and Rory (McIlroy) and Lee (Westwood) and Luke (Donald), what will it mean if they don’t get the captain they want?’”

But when the 15-member European Tour tournament committee convened in Abu Dhabi, they unanimously named McGinley the captain for 2014 at Gleneagles.

The turning point, McGinley says now, was when McIlroy endorsed McGinley during his introductory Nike press conference in Abu Dhabi. Within days, a few of the other European Tour stalwarts took to Twitter to voice their support for McGinley.

“There’s no doubt Twitter played a part in this selection,” McGinley said, according to the report. “It’s the voice of the players.”

For months, it seemed a two-man race between McGinley and 2011 British Open champion Darren Clarke. Clarke, however, withdrew his name from consideration, believing he still had a few good years to compete on the European circuit.

Enter Montgomerie, the successful 2010 captain at Celtic Manor, but also a polarizing figure among both fans and fellow players.

Though McGinley could have politicked for the job, he instead remained quiet, putting his faith in the system and remembering that at Medinah, after the Europeans’ stirring comeback victory, “the guys spoke privately to me, that they all wanted me as captain,” he said.

“I didn’t want to be beating my own drum,” he said, according to the report. “The players’ drum was going to be a lot louder than mine.”

Now, of course, he will be matched against Watson, a 63-year-old legend who casts a much larger shadow than his.

Said McGinley, according to the report: “I wanted to say that we don’t have anyone of Tom Watson’s stature in Europe, so whoever goes against him is going to be an underdog in terms of their playing record. If you look at the great managers in football, few of them were great players. Show me the correlation between a brilliant player, whether in football or golf, and a brilliant manager? But I couldn’t say that in public.” 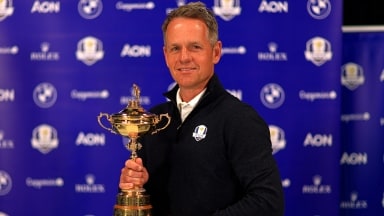