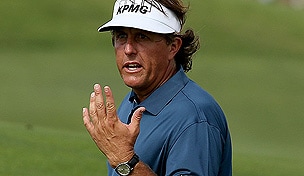 KIAWAH ISLAND, S.C. – One of the more remarkable things about golf is how difficult it can be even for those who play it best.

Every player who has ever touched a club has gone searching for some kind of swing key, thought, move or rationale that will allow them to find the elusive target that is playing the game well.

On Thursday, after he had seen most of the sights of Kiawah Island’s Ocean Course en route to an opening round 73 in the PGA Championship, Phil Mickelson insisted that he was closer to finding something to unlock the door than he had been in quite a while.

It sounded as much like a plea as a statement of fact.

But on Friday, he got a lot closer. It wasn’t as if he found every fairway or every green. But his misses weren’t nearly as far off target as they have been the past few months. They were in places where he could work his short-game magic and piece together a 1-under-par 71 on a day when breaking par was a small miracle.

It will probably take something more than that for Mickelson to end up with the Wanamaker Trophy, but at least it's a possibility. Given his play since the Masters, that’s no small thing.

He began the year like it was going to be one of the best of his Hall of Fame career. He shot a stunning 64 on Sunday at Pebble Beach, dusting Tiger Woods by 11 shots, en route to his fourth victory there. A week later he lost a playoff in Los Angeles before a third-place tie in Houston the week before the Masters.

He went to bed on Saturday at Augusta a shot out of the lead, convinced he would be slipping on a fourth green jacket. Instead, he train-wrecked on the fourth hole, trying to play two shots right-handed before he limped to the fifth tee after a triple-bogey 6, and ended up tied for fourth. For most, that’s a good week in a major championship. For Mickelson it was a huge letdown.

Since then, it hasn’t been pretty. He has one top 10 – a tie for seventh in Dallas – in nine tournaments. He has withdrawn once and missed two cuts, including at the British Open. He began his U.S. Open, playing in a group that included Woods, by losing a golf ball on his first swing of the week and finished T-65.

Bad stretches aren’t new for Mickelson. But it hasn’t just been lousy golf, it has been his demeanor. At times he’s been downright cranky.

He complained to Tour officials in Dallas about the presence of cellphone cameras on the golf course and went a step further at the Memorial, reportedly texting PGA Tour commissioner Tim Finchem during the round to complain. After signing for a 79 that day and again telling a Tour official what he thought of the cellphone cameras in no uncertain terms, he withdrew, claiming he was exhausted.

It was all very un-Phil-like for the always image-conscious Mickelson. If there has ever been a player who has gone out of his way to say all the right things during his career, it has been Mickelson.

Maybe being inducted into the Hall of Fame, as much as he said he enjoyed the experience, made him feel old. Maybe it’s more than that. Mickelson doesn’t talk publicly about his private life except to thank people for the good wishes they have sent his way since both his wife and his mother were diagnosed with breast cancer in 2009. He does commercials for the drug that has kept his psoriatic arthritis under control since he first began experiencing the symptoms more than two years ago, but doesn’t talk about how it might be affecting him.

The disease is progressive – even with drugs that slow it down or keep it under control. Cancer is frightening at all times and Amy Mickelson still isn’t the presence on Tour that she was before she got sick.

Mickelson has never been an excuse-maker. Before he finally won his first major at age 33 he never once complained about bad luck or having to play against Woods at his best or played the “I will have had a great career even if I never win a major,” game. He was honest about the need to win at least one if he wanted to be considered a great player. Now he’s got four of them.

At the moment, though, he’s still searching. Maybe the 71 on Friday was another beginning, a turning of the lock that will get him back inside the place where he wants his game to be.

He was Eddie Haskell-Phil again on Friday, saying all the right things about the golf course, the setup and the job the PGA of America has done bringing this event to a place that is a logistical nightmare for most involved.

It was very hot and very windy on Friday and every shot was an adventure. Vijay Singh shot a 69 that conjured memories of Tom Watson’s 71 all those years ago at the Memorial on a day when the stroke average for the day was 79.

But Mickelson’s 71, aided by a birdie-birdie start at 10 and 11 to start his day, wasn’t that far behind. On No. 11, he hit a driver off the deck, a classic Mickelson play, and it led to two-putt birdie that got him pointed in the right direction.

“I actually felt like it would be easier to control it because I wouldn’t have to fight the wind,” he said of that decision. “It would just stay down and the wind wouldn’t touch it so I didn’t have to do anything special.”

Maybe not special, but very, very good. Maybe it was just a day when an experienced player got it around and got it up and down enough to score. Or maybe the search is about to yield some results.

If nothing else, Mickelson’s mood on Friday seemed considerably brighter than it has been in recent months. 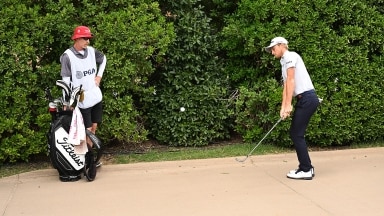 WATCH: Remarkable cart-path save for Zalatoris

Will Zalatoris avoided a catastrophe with an remarkable up-and-down off the concrete on the sixth hole Sunday. 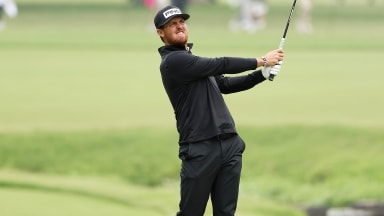 The 104th PGA Championship is at Southern Hills. We are tracking the second men's major of the year. 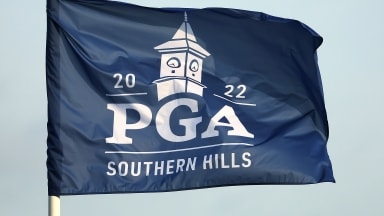 The PGA of America announced Saturday that it was offering its largest-ever purse at this year’s PGA Championship.