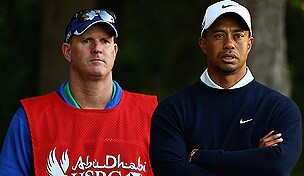 Not even a recruiting pitch from caddie Joe LaCava could convince Tiger Woods to return to Riviera for the first time since 2006.

According to a report Tuesday by the Los Angeles Daily News, LaCava told reporters after the final round of the Farmers Insurance Open that Woods wouldn’t play in L.A., even though “I tried to talk him into it.”

It was also reported earlier this week that Woods won’t return to Pebble Beach for next week’s AT&T National Pro-Am after playing in the event last year. Woods has until Feb. 8 to commit to the Northern Trust Open, a tournament he has played 11 times without winning.

Though Woods has not updated his tournament schedule on his website, he will likely play three events in a row, beginning with the Feb. 20-24 WGC-Accenture Match Play Championship, followed by The Honda Classic and WGC-Cadillac Championship.

Tiger Woods isn't on site as a vice captain this week at Whistling Straits, but his presence is still being felt by Team USA as these matches.