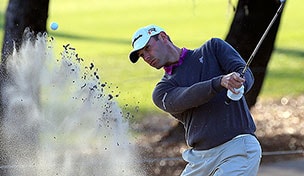 It just took him a little longer to get there.

In breezy conditions on a tough golf course, Stefani never came close to making a bogey until his final hole Thursday in the Tampa Bay Championship. He rolled in a par putt from just inside 5 feet to complete a 6-under 65 and take a two-shot lead over Brian Harman.

''Kind of fought through a couple of bad shots coming in – or not so great shots – and managed to get balls up-and-down and make a few putts,'' Stefani said. ''So all in all, today was a great day and looking forward to getting out there tomorrow.''

There's not many ''bad'' shots in a bogey-free round on the Copperhead course at Innisbrook, which some consider the best track on the Florida swing. The course played just more than two shots over par. Only 13 players broke 70, and 25 players broke par.

Harman came up short and into a bunker on the ninth hole and closed with his lone bogey for a 67. Harris English finished on the 18th and also hit into a bunker, except that he three-putted from 40 feet above the hole and had a double bogey. That gave him a 68, tied with Brendan Steele and Tag Ridings.

Geoff Ogilvy, at No. 49 in the world and needing to stay in the top 50 the next three weeks to get into the Masters, was in the large group at 69 that included Lucas Glover and a pair of past champions in Vijay Singh and K.J. Choi.

Stefani is a 31-year-old from the Houston area who finally made it to the PGA Tour by finishing 16th on the Web.com Tour money list. He is playing new courses and staying in unfamiliar places, though he had at least a few examples of other rookies this year to show the way.

Russell Henley won the Sony Open, and another rookie (Scott Langley) played with him in the final group. Three others have played in the final group this year – Brad Fritsch at Torrey Pines, James Hahn at Pebble Beach and Luke Guthrie two weeks ago at the Honda Classic.

''It's great to see those guys play well, because I competed with those guys all last year and they all won – except Scott – on the Web.com last year a few times and they are all super nice guys, good players,'' Stefani said. ''Everybody hits their strides differently. I'm more of patient kind of guy, and just kind of wait for things to happen. I know eventually things will start clicking, and I've really been close to playing good all year.''

Defending champion Luke Donald opened with a 70 and was angrier than usual, a testament to the course. Donald was poised to open with a great round, at 4 under with four holes to play despite missing three birdie chances inside 12 feet.

A poor drive led to bogey on the sixth. His tee shot on the par-3 eighth rolled toward the back lip of a bunker. And then a flier out of the rough on No. 9 sailed over the green and into a slope in the bunker with very little sand. That made for three bogeys in four holes, and turned a solid round into a frustrating one.

''At one point I felt I should have been 5 or 6 under,'' Donald said. ''To walk off with a 70 and play like that is hard to take. It was shame to cough up a couple of shots. Fifteen of those holes, I played really solid golf.''

Some of the early starters arrived in darkness, the temperatures cool and the wind already blowing.

This hasn't been the best weather on the PGA Tour this year. Already there was such high wind at Kapalua that the tournament didn't start until the fourth day. Fog wiped out an entire day in San Diego. Snow put the Match Play Championship one day behind.

''It felt more like a major championship today,'' Steele said. ''Usually the head at the U.S. Open is a few under after the first round at least, even if the winning score ends up being over par. To see it only be 3 under at this point is really a testament to how good the golf course is and how difficult the conditions are. Put that combo together and it's not a course that you fake it around. It's not a course you can get away with bad shots.''

With the wind at his back, he hit wedge into 2 feet for birdie on the 10th hole to start his round. He made birdie on all four of the par 5s with a short game that he practiced for two solid days earlier in the week. He added his other birdie with a 20-foot putt on the third hole.

Most importantly, he made few mistakes. Stefani missed only three greens, got up-and-down from the bunker all three times and had to play out of the rough just once, with a tee shot he missed slightly to the left on No. 3.

''If you can drive the ball well out here, you can give yourself enough opportunities,'' Stefani said. ''But it's a tough driving course, and I was able to hit a lot of fairways, which put me in good position to make birdies.''

Harman has had some good rounds this year, such as his 65 in Phoenix on the second day, closing with a 66 in Puerto Rico and even the 67 he had at Riviera. But this one stood out for other reasons.

''This is definitely, probably the best thought-out rounds that I had,'' he said. ''I had a great game plan and stuck to it all day.''

That included his lone bogey, when he wasn't sure if his ball would jump out of the rough to the right of the ninth fairway. He opted for less club, a 7-iron, figuring that anything long would lead to bogey. He came up short and still made bogey, but at least he had a chance at par.

DIVOTS: Jimmy Johnson, the caddie for Steve Stricker, is working the next two weeks for Harris English. Johnson didn't work at Doral last week because that was the one tournament Stricker had his wife, Nicki, caddie for him. ... John Daly opened with a 72. ... Geoff Ogilvy had the low round (69) in the all-Australian group alongside good friend Adam Scott and Jason Day. Scott and Day each had 70.